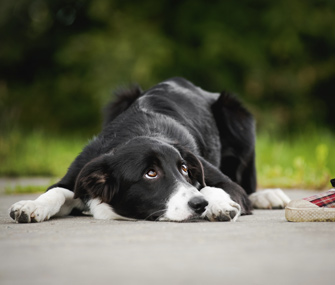 Wonder what’s going on when a dog tucks his tail, avoids eye contact, and then piddles at your feet? The culprit may be a common behavioral condition called submissive urination. It’s a dog’s way of saying, “Hey, I know you’re the boss of me.” A puppy might outgrow the behavior, but if he doesn’t, there are steps an owner can take to help modify the behavior. These include figuring out what triggers the behavior and then avoiding those triggers, avoiding dominant and aggressive gestures toward the dog, and using positive reinforcement instead of punishment.

Dogs may urinate inappropriately in response to a perceived threat, which may be intentional (for example, when an owner scolds a dog) or unintentional (for example, when an owner displays a dominant or aggressive behavior, such as looking directly into the dog’s eyes). Submissive urination is the dog’s way of communicating that he or she is not a threat and is submitting to the person’s dominance.

Dogs communicate with each other through body language and vocalization, so it’s natural for them to react to human facial expressions, gestures, and tones of voice in the same way. Human behaviors that may be threatening to dogs include:

Sadly, simply your being human is enough of a challenge for some overly sensitive dogs.

A dog that displays this behavior will typically show other submissive signs, such as tucking the tail, looking away, licking the lips, and rolling over on the back. This should be differentiated from other conditions involving inappropriate urination, such as excitement urination.

Excitement urination is somewhat different, occurring when a dog is overly excited, usually when the owner or visitors greet the dog. Affected dogs wag their tails and do not display submissive postures.

Though submissive urination occurs most commonly in puppies, it can happen with any dog at any age.

There is no breed predisposition for this extremely common condition.

Puppies can outgrow submission urination with a little patience from their owners. If not, veterinarians will first ensure that there’s no medical reason for the behavior and only then begin to suggest ways to address the problem. Here are a few steps veterinarians may offer their clients to help alter the behavior.

Identify the triggers to this behavior. Find the actions that elicit submissive urination in your dog and alter the circumstances. If your dog urinates when you greet him or her at the end of a workday, ignore your dog for a few minutes as soon as you get home. This will help your dog stay calm when you arrive, and you can greet your dog calmly when he or she approaches you.

Avoid punishment. When your dog urinates submissively, do not punish him or her or express frustration. Either ignore the behavior and walk away or calmly take your dog outside and reward him or her for urinating outdoors.

Avoid aggressive or dominant gestures. Speak calmly to your dog, avoid direct eye contact, kneel at your dog’s level rather than leaning over from the waist, and pet your dog under the chin rather than on top of the head. It can also help to approach your dog from the side rather than head on.

Reward confident behavior. Provide your dog with alternatives to submissive behavior and reward his or her efforts. For example, if your dog normally cowers when you arrive, ask your dog to sit, and then reward him or her with a treat. Keep rewarding good behavior throughout the day to build your dog’s confidence.

The key is to build a dog’s confidence with positive reinforcement and avoid all punishment. Scolding or punishing a submissive dog only worsens the problem by eliciting more submissive behavior.

Find out which pets are your best… ›
READ MORE: Dogs, Dog Behavior Issues