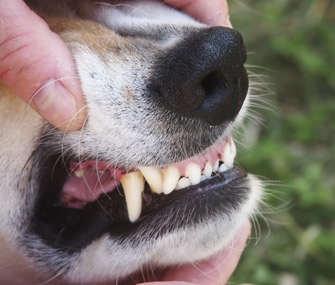 Thinkstock
Signs of thrombocytopenia can include pale gums and bleeding from the nose.

Thrombocytopenia is a long, complex word with a simple explanation: not enough blood platelets.

Platelets are the clotting cells in the blood. When blood doesn’t clot, bleeding happens. Excessive blood loss leads to anemia and worse. Thrombocytopenia can be caused by a variety of things, including an immune system disorder, a specific platelet disorder, more generalized blood clotting disorders, cancer, or infectious disease. Symptoms include tiny red spots on the skin, nose bleeds, excessive bruising or bleeding, pale gums, and weakness. To start, treatment may include blood or plasma transfusions, steroids, and antibiotics, as a veterinarian works to determine the underlying cause of the condition.

Thrombocytopenia is the medical term used to describe an inadequate number of platelets in the blood. Platelets (also called thrombocytes) are cell fragments in the blood that are necessary for forming blood clots and helping repair damaged blood vessels.

Platelets are formed in the bone marrow. Their numbers can be low if not enough are being made or if too many are being used or destroyed by the body. Causes of thrombocytopenia include blood loss, immune-mediated disorders, clotting disorders, cancer, and infectious diseases such as Rocky Mountain spotted fever and feline leukemia virus.

Adequate numbers of platelets are essential to survival. Platelets are needed to repair obvious injuries (such as open wounds) as well as microscopic injuries that occur in day-to-day life. If platelet numbers are too low, uncontrolled bleeding can occur. If treatment is unsuccessful, patients will almost inevitably succumb to overwhelming blood loss.

Thrombocytopenia is diagnosed based on history, clinical signs, physical examination findings, and laboratory tests. A platelet count is included in a complete blood count (CBC), which allows a veterinarian to determine the severity of the thrombocytopenia. Visually examining the blood via a “blood smear” to determine the size and character of the platelets may be performed as well.

Other tests may be performed to determine the cause of low platelet numbers. These may include a blood chemistry panel, urinalysis, radiography (X-rays), ultrasound, tests for immune-mediated diseases, tests for infectious disease, and taking a bone marrow sample for analysis of the blood at its source.

There is no breed predisposition for this condition.

Thrombocytopenia needs to be treated immediately upon its recognition. The problem is that many of the illnesses that cause thrombocytopenia are not obvious right away — which is why most veterinarians will choose to start treatment for the most common causes before knowing the exact one.

Initial treatments may include blood or plasma transfusions, steroids, and antibiotics. As the diagnosis becomes clear, your veterinarian can customize treatment. Some patients may need to be medicated for months to years until their platelet numbers stabilize. Follow-up care for these patients consists of frequent physical examinations and platelet counts. Medications may be slowly discontinued after platelet numbers have been in the normal range for some time; however, relapses occur in about 50 percent of cases.

Find out which pets are your best… ›
READ MORE: Dogs, Cat and Dog Conditions, Blood Health