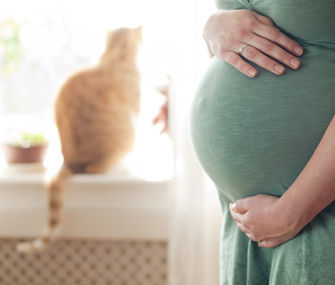 Internal parasites are not always worms. Sometimes they are microscopic single-celled organisms. One such bug that raises considerable concern is Toxoplasma gondii – the agent that causes toxoplasmosis. Just about all warm-blooded animals (people included) can become infected with this parasite, although it rarely causes significant illness. However, problems can arise when infection strikes sensitive individuals such as pregnant women or those who are immunocompromised. Fortunately, there are easy steps anyone can take to help prevent infection.

Toxoplasma is first and foremost a parasite of cats that is found worldwide. Infection is most common in free-roaming cats who usually pick it up by eating rodents or other critters that have Toxoplasma organisms encysted in their tissues.

Once liberated into the intestines of a cat, the parasites multiply within the digestive tract. Toxoplasma eggs, known as oocysts, are shed in cat feces for up to three weeks after infection. These oocysts become capable of infecting another animal in 1 to 5 days, and they can survive in soil for months to years. In non-feline hosts (such as people and mice), the ingested organism roams around the body and eventually becomes a dormant form encysted in muscle, liver, or other organs.

Toxoplasma usually doesn’t cause illness in infected cats unless large numbers of organisms are ingested or the cat has a poor immune system that can’t cope well with the infection.

People are most commonly infected through contaminated food such as raw or undercooked meat. Infection through accidental ingestion of oocysts in cat feces (or fecal-contaminated soil or water) is less common but has been known to occur.

About one-third of adult humans have been exposed to Toxoplasma at some time in their lives. Most never show any signs or illness, although some may develop mild, short-lived respiratory complaints that are usually chalked up to cold or flu. However, as already mentioned, Toxoplasma is a persistent bug that can remain encysted within the body in a dormant state, ready to strike again when the immune system weakens for any reason.

Pregnant women represent a special case that warrants caution. If infection occurs during pregnancy, the wandering Toxoplama can enter the fetus, potentially causing severe damage to the developing child.

In healthy cats, Toxoplasma generally causes few signs of illness. In cats with a suppressed immune system, a wide variety of illnesses can occur, including problems with the eyes, respiratory system, liver, and brain. In these cases, it’s tough to pin down the cause because of the wide range of signs that may show up, running the gamut from cough to seizures.

As part of the diagnostic work up, your veterinarian may want to take blood to test for the presence of antibodies to the Toxoplasma organism. This shows whether the cat has been exposed to Toxoplasma at some time, but does not necessarily prove that there is an active infection. Fecal exams can be performed to look for oocysts (direct evidence of the current presence of the Toxoplasma organism), but these tests are rarely helpful, given that the oocysts are not always shed in the stool.

When suspected, toxoplasmosis is usually treated with antibiotics.

Although problems from toxoplasmosis are relatively rare, those that do occur can be serious. The good news is that the risks can be minimized by following a few simple guidelines: