Breeds That Do Best at the Purina Incredible Dog Challenge 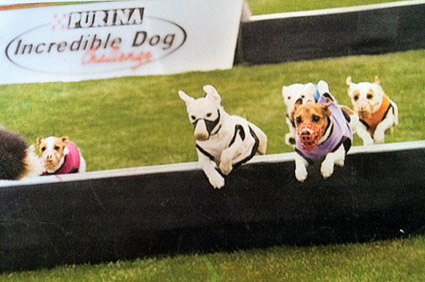 While the muzzles do make these Jack Russells look fierce, they help keep the competition fair. Here, the champion dogs, including Seaview Soul Man, are pushing towards the finish line in the hurdle racing.

The Purina Incredible Dog Challenge is this weekend, and we'll have reporters covering the big event, where top canine athletes from across the country strut their stuff. In the meantime, we wanted to know why certain breeds dominate at the PIDC year after year.

Name an activity and chances are that humans have bred a dog to excel at it, from scenting to herding. At the PIDC, there are five recognized events: agility, in which dogs navigate an obstacle course of jumps, weave poles and tunnels; dock diving; a head-to-head, 60-weave-pole course; a flying disc routine of aerial acrobatics set to music; and Jack Russell Terrier hurdle races.

Depending on the event, the dogs who triumph are almost always Labrador Retrievers, Border Collies, and Jack Russell Terriers — or breeds with similar skills and conformation, such as Shetland Sheepdogs, Belgian Malinois, and Rat Terriers. So what makes these canines so tailor-made for the PIDC turf? We asked veterinarian Michael Davis, professor of physiological sciences and director of the comparative exercise physiology lab at Oklahoma State University, to divulge what drives these breeds to run, jump and even fly. 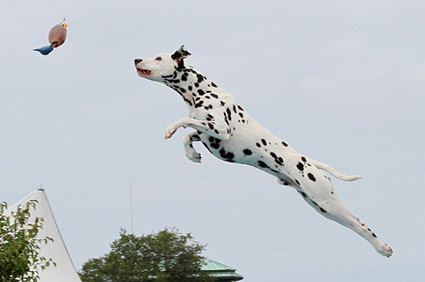 Courtesy of Jim Zelasko
While Labs tend to be the frontrunners at dock diving, Lance, a 7-year-old Dalmatian, has what it takes to be a champion.

According to Davis, dogs who possess the greatest prowess when it comes to canine sports have skeletal structures that are more conducive to athletic activities. In the case of dock diving, Labs — quintessential water dogs — excel at this event, with other retrieving breeds and a couple of herders, like the Border Collie and the Belgian Malinois, hot on their heels.

“In general, bigger dogs do better at jumping off docks because, as much as a Jack Russell would like to fly 24 feet, that would be enormous in proportion to his body length,” Davis says. “It would be half as enormous for Labs. They're basically built to run and jump a lot, so the shape of their bones provides them with a certain mechanical advantage.”

Top athletes of any species exude more than just physical ability. A lot of their success is, well, all in their heads — for dogs, that means an innate desire to retrieve, chase, jump and navigate through tunnels. “With the types of breeds that we’re talking about, there’s been an enormous amount of selection pressure to not just exercise, but to want to exercise,” Davis says.

Border Collies, for example, have a heritage of herding sheep through narrow gateways and responding instantly when a sheep breaks from the group. This background gives the breed a natural ability to whip through weave poles, perform the balletic moves of a winning flying disc routine, and complete an agility course with speed and precision.

"They tend to be very active dogs, with a strong work ethic and a desire to please their owner," says Amber Abbott, whose Border Collie, Joker, took home first place in the weave-pole event last year. "Border Collies are super athletic and smooth in their movements, which is evident in their performance of the weave poles. As long as you keep it fun for them — a toy will usually do — they'll work and play forever."

The compact and workmanlike Jack Russells (also known as Parson Russell Terriers) have flexible bodies, allowing them to expertly maneuver through underground dens. They also possess the speed and stamina to run alongside fox hunters, so racing is a natural and fun activity for the breed. For these reasons, Jack Russells are the only dogs who compete in the PIDC hurdle races — and they have to wear muzzles to ensure that they don’t accidentally injure each other in the enthusiastic rush to the finish line.

"When my dogs see that racetrack, and hear those boxes close, they go crazy,” says Janine McClure, whose Jack Russell, Seaview Soul Man, was the West Coast hurdle racing champion in the 2010 Purina Incredible Dog Challenge. “That’s the best part about racing for us — that our dogs enjoy it so much, and they get to run, run, run.”

Of course, even though some breeds have an athletic advantage for certain events, that doesn’t mean all breeds can’t participate in the PIDC. With the exception of the Incredible Jack Russell Hurdle Racing, events are open to any breed or mix. And there can be underdog winners, like Lance, a 7-year-old Dalmatian who came in second at the 2010 Eastern Regionals of the Diving Dog competition.

According to his owner, Bridget Telencio, Lance was practically born to master dock diving. "He loves the water and has a strong desire to swim," she says. "Lance is also fortunate to have a lean, light body, which makes it possible for him to compete at the top year after year."

Ultimately, the Purina Incredible Dog Challenge is about having a good time with your dog. “Everyone cheers on everybody else’s dog, and keeping score is kind of superfluous,” says Davis, who does dock diving with his own Golden Retrievers. “Jack Russells and bitty toy breeds get some of the biggest cheers because they’re out there giving 110 percent, just like the big dogs.”