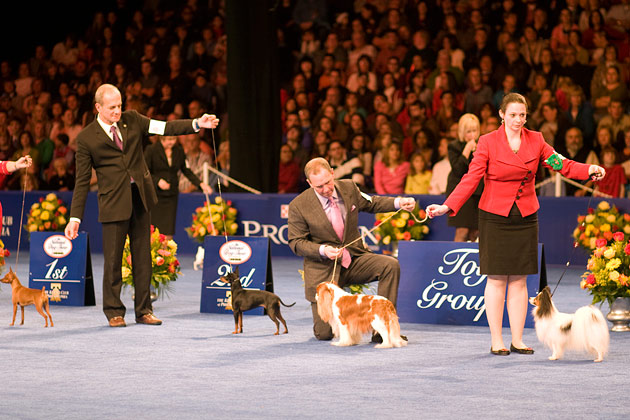 In canine-loving households, The National Dog Show Presented by Purina is as much a part of Thanksgiving as turkey and pumpkin pie. For the 10th consecutive year, NBC will air The National Dog Show Presented by Purina immediately following its telecast of Macy's Thanksgiving Day Parade. Some 2,000 purebreds from 170 breeds will vie for the coveted Best in Show title at the prestigious event, hosted by the Kennel Club of Philadelphia. This year, six new American Kennel Club (AKC)-sanctioned breeds make their debut at the event: Entlebucher Mountain Dog, Norwegian Lundehund, Xoloitzcuintli, American English Coonhound, Cesky Terrier and Finnish Lapphund. (Click here to see our photogallery of the new breeds.)

John O’Hurley of Seinfeld fame and the season one winner of ABC’s Dancing With the Stars will host the show. O’Hurley will be joined by analyst David Frei, the voice of the Westminster Kennel Club Dog Show on the USA Network and one of America’s top authorities on the sport. (Check out their video below on how to watch a dog show.)

According to the AKC, the goal of dog shows is to evaluate breeding stock in order to find the best dogs who can produce the next generation of purebreds. The judges evaluate teeth, muscles, bones and coat texture, as well as view each dog in profile to assess overall balance and see how the features fit together in action. Judges then give awards according to how closely each contender compares to the mental image of the "perfect" dog described in the breed's official standard, including specifications for structure, temperament and movement.

The elite canines must prevail through several levels of competition in order to capture Best in Show. The dogs are initially judged against their own breed, with the first-place winners advancing to compete in one of seven group competitions — Sporting, Hound, Working, Terrier, Toy, Non-Sporting and Herding. Four placements are awarded in each group, but only first-place winners advance to the Best in Show competition. Last year’s Best in Show winner was a 3-year-old Irish Setter named Clooney (aka GCH. Windntide Mr. Sandman).

NBC’s broadcast of The National Dog Show Presented by Purina airs Thursday, November 24, 2011, from noon to 2 p.m. in all time zones.