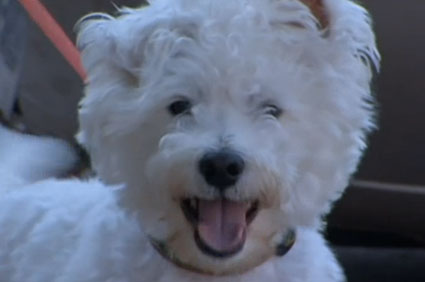 Better bring your pooper-scooper with you in this neighborhood. A battle between two neighbors near Washington, D.C., over dog poop ended Tuesday when a jury cleared the alleged offender, The Washington Post reports.

Virginia Cornell claimed she saw her neighbor, Kimberly Zakrzewski, walking Baxter, a Westie-Bichon Frise mix she sometimes takes care of, one morning in April, and that Zakrzewski left the dog’s mess behind, “just to annoy us,” according to the Post.

Zakrzewski says she always takes bags and cleans up after the dog.

In this case, a photo of the pile in question was used as evidence, while the defense argued the poop just doesn’t look like Baxter’s. They say they know his poop when they see it. Yes, it’s a real whodunit.

Meanwhile, to avoid these kinds of disputes (or maybe to avoid the unscooped poop in the first place), some apartment complexes and homeowners associations have turned to forensics.

They’re signing on with PooPrints, a Tennessee-based company that develops a DNA database using cheek swabs from each dog in a community.

Then, when there’s an offense, a sample is mailed to the company’s lab, which checks to see if there’s a match. It costs about $30 to register each dog and $60 to test a sample. And who foots that bill? The cost of the test is usually passed on to the offender’s owner, the Post reports.

"Once the program is in place, the reality is that few samples are ever tested. It’s a great deterrent,” Jim Simpson, president of BioPet Vet Lab, which offers PooPrints, told the Post.

One community where the system is in place is Timberwood Condominiums in New Hampshire, ABC News reported in June. The condo complex’s manager turned to the CSI-like lab when she decided sending warning letters and picking up the poop herself was for the dogs.

Zakrzewski, who paid $1,200 to defend herself in Virginia, said she’s sure her case must seem absurd to onlookers. But we can see both sides of the problem. What do you think? Have you ever found yourself in a mess over dog poop? And how far would you take it?

Find out which pets are your best… ›
READ MORE: Dogs, Living With Pets, Animal News