Cat sex isn’t fun. That’s because the feline penis is barbed, with about 100 painful points that scrape the inside of the vagina during the mating process. That’s why female cats yowl in pain when they’re bred and why male cats are often smacked by the claws of their angry mate — she’s lashing out. Biologists believe the scraping in part works to remove the sperm of other males, but mostly what the pain does is stimulate the female to release a hormone that starts to ripen the eggs in her ovaries. The procedure is the same for lions and domestic cats — and every feline in between. It certainly tells you how powerful the mating urge must be for cats to reproduce despite a procedure that doesn’t seem particularly satisfying. 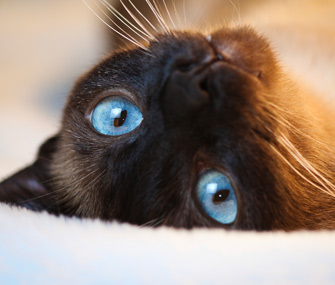 Kittens are born with blue eyes. In this, cats are like people. That’s because melanin, the substance that determines eye color, isn’t in full play at birth. The more you have of it, the darker your eyes, but that’s only part of the story. When babies open their eyes, the melanin in the irises starts to express itself, thanks to exposure to ultraviolet light. (When an animal is an albino, there is no melanin in the irises, which appear pink because of the blood vessels in the eye.) Cats have an astonishing range of eye color, from China blue to brown, with amber, green and hazel in between. Some cats have eyes of two different colors, and a few even have irises of two different colors. But they all start out with baby blues.