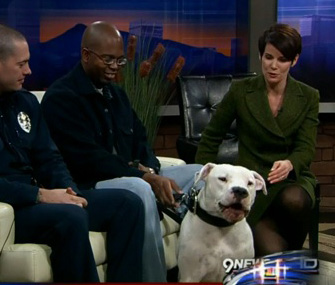 Like everyone else, I cringed when I saw the story of the dog who attacked Denver news anchor Kyle Dyer. Dyer was bitten on the face, and she will be off work for weeks following reconstructive surgery. And Max, the dog? Fate unknown. He’s in rabies quarantine, but what will happen to him after that has yet to be decided.

Max was on the show to be reunited with the firefighter who heroically waded into an icy lake to save him after he fell in. And now, because of poor judgment, a feel-good story has turned tragically bad.

Dogs Get Stage Fright Too

I know about dogs, bites and TV. In nearly every TV appearance I've made, whether on Good Morning America or the local news, I’m usually holding a dog. Many times, they’re dogs I’ve just met a few minutes earlier.

I've never been seriously bitten myself during these appearances, and the dogs I've handled on set have never bitten anyone else. Why? Because I know what makes a dog feel safe and secure and what makes a dog anxious or angry. No matter what else I'm doing on set, I’m paying attention to the dog — close attention.

I watched the clip from the Denver TV news show and was amazed at what I saw. The dog was showing signs of stress, and the owner had him tightly restrained, telegraphing his anxiety down the leash. Both were displaying distressing body language that would have been clear to any veterinarian, behaviorist or professional trainer well before the dog escalated his nonverbal warnings into a bite that connected tragically.

I believe it simply didn’t have to happen, and if there’d been someone on set who understood dogs better, it likely wouldn’t have. I know: I’ve been in situations with anxious pets on TV many times.

One such time, I was doing The Martha Stewart Show, and a producer who’s a longtime friend of mine wanted to feature her dog on the show. This dog was a lover, not a fighter, she said, a real powder puff! And the dog was all that, but only in his own home. Once the dog got into the studio, this former pooch pacifist was very anxious: panting, ears back, pupils dilated, ready to snap and bite from fear. While people wanted to pet the "nice dog," I insisted that I was the only person who would interact with him on the set.

What could have been a bad situation never was, because no one ever pushed the dog outside his comfort zone. The Denver news anchor, while well-intentioned, did not do the same, and the owner didn't know better either. I saw more than one of the cardinal sins broken on that short clip. Here are my three never-nevers:

Everyone should know these rules and follow them — children especially so. Because I have always practiced safe dog-handling, I think when it comes to bites I’ve been smart more than lucky. While most veterinarians will get bitten, those most likely to get nailed are new doctors who haven't yet learned the warning signs, those flashing yellow lights that you're about to run a red light and get bitten.


Dogs Are Pets, Not People

Of course, it’s easier if I’m paired with a dog I know. During the book tour for Your Dog: The Owner’s Manual, my coauthor, Gina Spadafori, brought McKenzie, her six-year-old champion retriever, with us on our bus; during the tour, McKenzie accompanied me to the TV interviews I did in almost every city. McKenzie is a relaxed and happy dog who has been well-socialized and well-trained. We never had a problem with her, but her mom and I never allowed her to be handled inappropriately. She likely would have been fine — she’s a very sweet-natured canine — but I know better than to push any dog to the limit. As much as we love them, we must always remember that our dogs are animals, not people.

That’s not an insult, by the way. The very animal nature of our pets is one of the best things about them. Through the bond, they offer us a way into their world and a way out of the high-stress, high-tech world we live in. The bargain is a good one, but sometimes we don’t hold up our end of it, and we ask too much of them and ignore the warning signs. Put yourself inside the mind and body of a dog in a stressful situation. You're in a place you don’t understand or maybe have bad memories of, such as a veterinary hospital. You're being restrained in an unnatural position, and your brain may default to the "fight or bite" programming.

If more people knew how to recognize the signs of stress and anxiety in their dogs, we’d have far fewer dog bites every year, and tragedies like the one that befell Max and Kyle Dyer this week would never happen.