Dog vs. Cat: Which Pet Is Better? 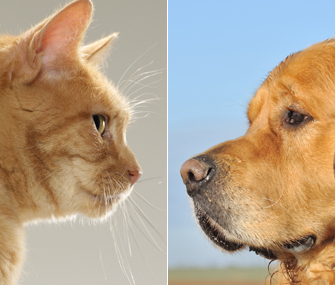 On our Almost Heaven Ranch in north Idaho, in fact, the score is dead even: four dogs, four cats.

But I don’t see cats and dogs as being the same. They need different things from me as a veterinarian, and they behave very differently from each other. For example, the tendency of cats to hide their illness is one reason why they don’t go to the veterinarian as often as they should; their unhappiness at leaving their home is another.

Just for fun, I decided to think about how dogs and cats differ in terms of a competition. If we had pet Olympics, would dogs take home the most gold, or would cats?

To determine which is the "better" pet, let's see how cats and dogs stack up in five categories: vision, smell, speed, endurance and intelligence.

Vision. Cats win this one. Both animals are predators, which means their visual acumen stresses movement over detail. Neither cats nor dogs are going to read the type on road signs, and their color vision isn’t as strong as ours, but a quick movement will get noticed even if it’s minor. But give the gold to the cats for their ability to see in far less light. When the mousies come out to play at dusk, the cats are ready for them. A twitch of a whisker or a tiny movement in the leaves can be seen in near-darkness.

Smell. Dogs even the score with their sense of smell. There’s a reason why you don’t see drug-sniffing cats, and it’s not just because cats aren’t exactly amenable to clocking in for a 9-to-5 shift at the police station. While cats have a better sense of smell than humans do — really, we’re pretty worthless in the nose department — the canine sense of smell is nothing short of astonishing. Most dogs have a face that’s really nothing but nose, and their ability to detect and distinguish odors is in the range of four times better than a cat’s.