I love to travel, and, of course, when I do, I always keep an eye out for interesting cats and dogs. I’ve seen many unusual breeds on my visits to more than 80 countries around the world.

Cats are travelers, too. They were domesticated — as domesticated as cats can be, anyway — 7,000 to 9,000 years ago, most likely in the cradle of civilization known as the Fertile Crescent. It comprises the modern-day Middle Eastern countries of Iraq, Kuwait, Syria, Lebanon, Jordan, Israel, Cyprus and Egypt, plus bits of Turkey and Iran. From there, cats spread throughout the world, prized for their ability to protect crops and grain stores from mice, rats and other vermin. Let me introduce you to some far-flung felines from foreign lands. 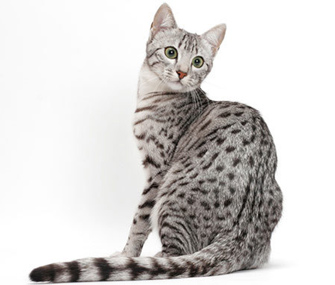 Tetsu Yamazaki, Animal Photography
The Egyptian Mau is the only domesticated cat with a naturally occurring spotted coat.

Cats From Many Lands


Egyptian Mau: Ancient artwork depicting heavily spotted cats with distinctive mascara markings, combined with research by feline geneticist Leslie Lyons at the University of California at Davis, supports the belief that the Mau originated in Egypt. He may be descended from the small African wild cat and is the only domestic cat with a natural spotting pattern. This breed takes his name from the Egyptian word for cat. He bears an M shape on his forehead known as the mark of the scarab.

Li Hua: Native to China, this brown mackerel tabby cat can be an excellent ratter and typically likes to be with people. One of his distinguishing marks is a smiling expression, the result of a tiny black spot on the corner of the mouth, making the line of the mouth look longer. In China, he is also known as the Dragon Li. His breed standard says he should be able to jump in the air and turn around twice before landing. I wonder if he coached any of China’s Olympic gymnasts?

Abyssinian: You might think he’s from Ethiopia, but genetic research tells us that the Abyssinian probably originated on the coast of the Indian Ocean and in parts of Southeast Asia. He stands out for his ticked coat of many colors, including red, chocolate, cinnamon, blue and lilac, and for his mischievous and clever personality. He’s nicknamed the “Aby-silly-an” because of his antics. Don’t be surprised if you catch him swinging from the chandelier.

Turkish Angora: Lots of cats are hybrids, meaning they were created by people who crossed two or more breeds, but the Turkish Angora is what’s known in the cat world as a natural breed. He has existed for hundreds of years in Turkey, where he is rightly considered to be a national treasure. Most of us think of Angoras as beautiful white, longhaired cats with blue or green eyes, but they also come in other colors and patterns including tortoiseshell, tabby and calico. Beneath his beautiful exterior, the Angora is a wickedly funny trickster who tends to love people and may enjoy playing host to guests. He loves water and may join you in the bathtub, shower or swimming pool.

Kurilian Bobtail: No, he’s not an alien from your favorite sci-fi show but a natural cat breed from Russia’s Sakhalin and Kuril islands, where the breed has been known for at least 200 years. The Kurilian can be short- or semi-longhaired, with a soft, silky coat that comes in a variety of solid or tabby colors. He generally has a laid-back temperament — except when he’s mousing, a skill at which he excels. His bobbed tail resembles a pompom, and no two cats have identical tails.