Integrating a Younger Pet With an Older Pet 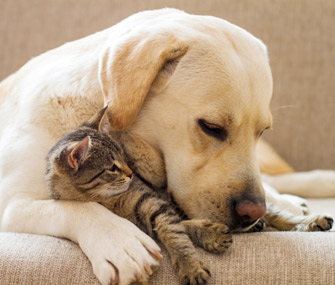 You have puppy or kitten fever, but you live with a senior pet. Should you get a new animal? We often have the idea that a younger pet will revitalize an older one, but is that really true?

I have found over and over that bringing a new pet into a household with a senior can breathe new life into the old boy or girl. We give pets the time we can spare and the love we can share, but living with another member of the same species can provide them with social, mental and physical benefits. We see it when they join in on neighborhood barking, groom each other, curl up together for a nap or join forces to chase a ball or toy. And a more experienced pet can teach a new one the household rules. In fact, with the right pairing, the time you spend training could be cut significantly.

Studies from the Banfield Pet Hospital show that animals in multipet households live longer and suffer fewer health problems. If your pet always has a buddy, he will most likely benefit, and so will you, as you’ll never be without a pet, even if one is given the final grace.

But not every pet pairing is a match made in heaven. Here’s what to think about if you’re considering bringing in a buddy for yourself and your golden oldie.

Any time you have more than one dog or cat, you run the risk of a conflict. That goes double if there are differences in age, size, activity levels or species.

Old dogs or cats might just want to kick back and take it easy, but puppies and kittens have more energy than they know what to do with — and they often use it to bounce off the senior member's head. And we’ve all seen the big galoot of a puppy who pesters a tiny old dog — or cat — to the point where the smaller animal prefers to stay in hiding rather than get pounced on again by the youngster.

Choose a new dog or cat who will mesh well with your current pet. For instance, it can be helpful if your new puppy — when fully grown — is the same size as or smaller than your senior dog, so the former doesn’t beat up on the latter too much. It’s also a good idea to get a pet of the opposite sex. Even when pets are spayed or neutered, opposite-sex animals tend to get along better than those of the same sex.

Are you bringing a dog into your older cat’s happy home? A cat and a dog can absolutely be best friends, but you have to help them build a relationship slowly and carefully. To make sure your cat doesn’t have a hissy fit about her new housemate, help your pooch learn to respect her space by keeping him on leash at first when he’s around her and providing her with escape routes — up a cat tree, under the sofa or through a pet door — in case your dog gets too up close and personal. Feed them separately, so that neither is concerned that the other will steal his food.

You might be surprised to learn that it could be less difficult for your cat to accept a dog than a new cat. Once they reach adulthood, cats are not always big fans of other felines. In my opinion, they get along best if they are introduced to other cats before they are each 2 years old. If that’s not possible, try to choose a mellow mouser who won’t ruffle your cat’s fur.