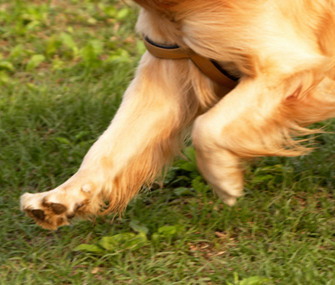 In dogs, as in people, knees are often asked to do things they really weren’t meant to do. And in dogs, as in people, that means they get injured pretty often — and for many of the same reasons. Although they can seem fragile to anyone who has ever hurt one, knees are amazing joints. The ligaments that hold the bones in place do their best to allow a wide range of movement without pushing the joint in ways it wasn’t meant to go.

Knees weren’t expected to handle the running, leaping, twisting and very hard landings of elite human athletes in sports such as football. In the dog world, such sports as canine flying-disk acrobatics can likewise push an athlete's knees to the limits. Proper conditioning and proper warmups can minimize injuries, but they will never prevent them in these high-performing types.

But just as you’re unlikely to be an NFL wide receiver, your dog is unlikely to be an agility star. Which brings me to the more common sufferers of knee injuries in dogs (and people): The overweight/obese and the weekend warriors — and yes, those categories often overlap.

Sudden Lameness May Be a Knee Injury

In young, active dogs, a knee injury typically begins with a yelp and a dog who doesn’t want to put weight on a back leg. These injuries are what we call “acute” — they happen in a flash, and the dog is in so much pain that most owners get to a veterinarian right away.

The diagnosis is pretty easy to make: The upper and lower parts of a dog’s leg aren’t supposed to move where they meet at the knee. When a ligament ruptures, the lower leg can be moved forward in what is generally described as “a drawer sign.”

While general-care veterinarians can do joint-repair surgeries, it’s not uncommon for these cases to be referred to board-certified surgeons. There are a couple of different ways for a surgeon to repair the joint, some of which have been clinically shown to be more effective than others. Ask for a thorough explanation of all your choices and the probable outcomes for your particular pet before making a decision for your dog.