The Mystery of Feline Pancreatitis 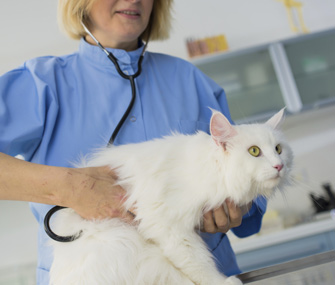 When you think about it, the pancreas is a lot like a cat: It typically goes about its business (of producing hormones and digestive enzymes) without a lot of fuss, but it definitely has a volatile and mysterious side that shows itself when the organ becomes inflamed.

The pancreas pulls double duty in the body. It produces hormones such as insulin and glucagon, which help maintain an appropriate level of glucose in the blood. But it also makes digestive enzymes that enable the body to use carbohydrates, fats and proteins for energy. That multitasking is all well and good, but it can cause confusion when a veterinarian is trying to diagnose a cat with pancreatitis.

Another reason pancreatitis is such a puzzle is because we usually don’t know what causes it. In most of the cases we see, we don’t know why the pancreas has become inflamed. In cats, pancreatitis doesn't seem to be associated with obesity or high-fat foods, as it is in dogs, but it can be linked with liver and/or inflammatory bowel disease. In addition, cats as young as 5 weeks and as old as 20 years can develop pancreatitis.

As with any feline health problem, diagnosis begins with a medical history and a physical exam. Common signs we may see on examination of a cat who turns out to have pancreatitis are dehydration, low body temperature (or sometimes a fever) and icterus, a yellowish discoloration of the gums, whites of the eyes and ear tissue. We may also feel a mass in the abdomen, or note that the abdomen is painful when palpated.

Diagnostic tests don’t give us a definitive answer, but they can sometimes help. A blood test that measures what’s called pancreatic lipase immunoreactivity (fPLI) can give some useful answers, but results may not be available for a week or more.

An abdominal ultrasound may or may not indicate that the pancreas is inflamed, but certain findings are consistent with pancreatitis. On the other hand, some cats show no abnormalities on ultrasound but still have severe pancreatitis. One of the advantages of an ultrasound is that it may rule out or detect other diseases that cause similar signs.

A biopsy would let us know for sure that we were dealing with pancreatitis, but it’s a very bad idea to anger the pancreas. Poking and prodding at it to obtain a biopsy sample can trigger inflammation and make the condition much worse. Usually, our goal is to be as noninvasive as possible with both diagnosis and treatment.