What Is Canine Cushing's Disease? 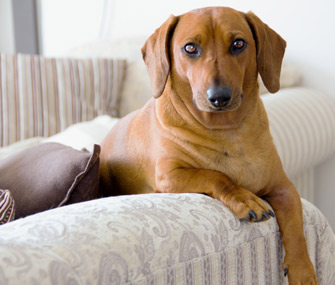 One of the first cases I saw after graduating from veterinary school was a big old dog who was overweight and had very little hair. He was a classic case of Cushing’s disease, which occurs when the adrenal glands go wild and produce too much of the hormone cortisol. You may also have heard it called hyperadrenocorticism, but Cushing’s disease — named after the neurosurgeon who first described the disease in humans in 1910 — is a heck of a lot easier to say and remember.

Although Cushing's disease can occur in cats, it's more commonly seen in dogs.

When dogs secrete too much cortisol, they may gain weight, lose hair on the body (but not the head and legs), and start eating, drinking and urinating more than normal. They might develop a pot belly or thin skin that bruises easily and they may pant more often. The excess cortisol suppresses the immune system and may cause bacterial infections, especially in the bladder. That wide range of disease signs occurs because cortisol affects many different body systems.

Cushing’s can have a couple of causes. The most common type — pituitary-dependent hyperadrenocorticism (PDH) — results from a pituitary tumor that causes excessive secretion of ACTH (short for adrenocorticotropic hormone), which in turn causes the adrenal glands to secrete excessive amounts of cortisol. Adrenal gland tumors are a less common cause of Cushing’s. Finally, some dogs have a condition called iatrogenic Cushing’s syndrome. These dogs have usually received glucocorticoids such as prednisone over a long period, and they develop all the signs of Cushing’s disease. That word iatrogenic means the condition was inadvertently caused by the medical treatment.

Veterinarians typically see Cushing’s disease in dogs 6 years or older, but it’s not unheard of in younger dogs. Dogs of any breed can develop Cushing's disease, but breeds that may be prone to the condition include Poodles, Terriers, Beagles, Boxers, German Shepherds, Labrador Retrievers and Dachshunds.

Cushing’s isn’t always easy to recognize, mainly because some of its signs can be mistaken for signs of age or boredom. If your dog’s coat is thinning or he’s eating more and gaining weight, it’s easy to think that he’s just getting older or that he’s bored because it’s wintertime and he’s less active. It’s always wise to get those changes checked out, though, because they could well be signaling that something is wrong.