Why Do Puppies Need a Rabies Booster Shot? 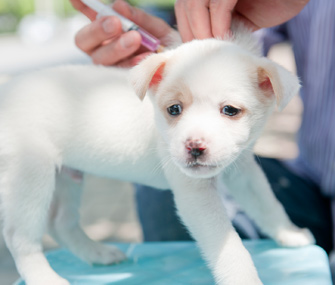 Q. If rabies shots last three years, why do puppies get one at four months and then again in a year?

A. Puppies and kittens are protected from disease for the first few weeks of their lives thanks to a “starter kit” of immunity passed from their mothers, primarily through their first feedings of an important kind of milk known as colostrum. The colostrum is nutrient-dense and provides newborns with not only antibodies to fight disease but also the beneficial bacteria essential to normal body functions.

Why Your Puppy Needs More Than One Shot

As the weeks pass, the maternal immunity fades, but until it’s gone, it effectively blocks any efforts to establish immunity through vaccines. That’s why puppies and kittens get a series of shots: Because we can’t know exactly when the maternal immunity drops off, providing vaccines at intervals is in effect a workaround, our best shot (if you will) at providing new disease-resistance at the point where the mother’s gift of immunity wears off.

Yes, this approach may well leave a gap in immunity, which is why veterinarians are so adamant in advising that young animals are kept away from places such as parks or pet stores where they could be exposed to sick animals. By about 16 weeks, we know maternal immunity has expired and the new immunity is in place, which is why your puppy can start going everywhere a few weeks after that last vaccine. The immunity against those diseases will now last for years, but because we can’t be sure exactly how long it lasts, vaccine guidelines now typically recommend revaccinating at three-year intervals and tailoring which vaccinations your pets need to your region and your pet's normal activities.

While the same general principles apply when it comes to rabies, the rules are a little different because of the very grave threat rabies poses to people. Diseases that can be passed from animals to people are known as zoonotic, and rabies is one of the zoonotic diseases that keeps public-health officials up at night. A rabid pet is relatively rare, but rabid wild animals — bats, raccoons, skunks, foxes — are not. Rabies vaccinations protect pets, but they also protect people by preventing rabies in wild animals to spread to those pets — and then to us.