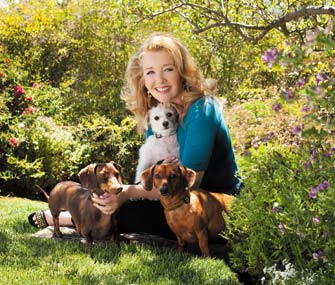 Charles Bush
Melody's pooches are top dog around the house, going where they want and mixing with friends and family.

A working actress since age 3, Melody grew up with a blind Poodle named Susie and a cat named Nikki — the same name as Melody’s character on “The Young and the Restless.” Melody has played characters representing all walks of life. But the role she embraces most is that of pet parent and animal rescuer.

Raised by her grandparents and mentored by Ethel Meglin, a dance teacher known for her instrumental role in starting Shirley Temple’s career, Melody grew up acting on television and in theater and modeling. As a teen, she focused on her musical abilities, training to be a concert pianist. But a fluke call from her childhood agent set her back on the path to acting, landing her a role in the Western feature film Posse, directed by Kirk Douglas. Though her career goals were changing, one thing stayed the same: Melody’s need to stay connected with pets.

“Ever since I moved out on my own I’ve always had a dog, always from the pound,” she says. “I think my first rescue was a Samoyed.” Melody named her Sarah, after a woman at the pound who rescued Samoyeds.

Melody’s latest rescue is a white mixed breed named Reilly. Her husband, a producer for The Bold and the Beautiful, was scouting out the South Central pound for a story line about the wonders of animal rescue, and Melody went along. She wanted to take all of the animals home, but she limited herself to one — the pet she immediately connected with.

“I tell people to never go to the pound with the idea that you have to adopt a certain breed or you have to have a male or you want a puppy or an adult. Forget all that,” Melody says. “You have to have that connection with your eyes and your heart, and you know when that happens. 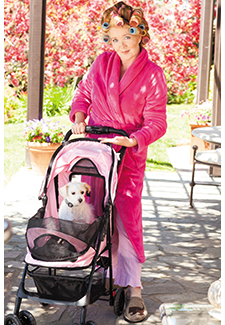 Charles Bush
Melody's family took her recent birthday as an opportunity to pamper her pooch, purchasing a dog stroller for Reilly.

“Reilly did that to me right through the bars, and I asked, ‘Can I take her out and just take her to the private yard and play with her?’ She just wanted to sit in my lap and stare into my eyes. And we saw through each other and all of our lives, all of our past lives and everything together, and she was the one for me.”

When Reilly first came home, Melody says she was skin and bone. She had no hair, and Melody initially thought she was a Chinese Crested. Since Melody adopted her, Reilly has regrown her fur and gained weight, settling into the lap of love and immediately learning commands like sit and stay.

Reilly joins a canine family that also includes two Dachshunds, Luca and Lola. Luca’s arrival was a surprise. Elizabeth, one of Melody’s daughters, saved her money and snuck out with her sister to purchase the pooch. Elizabeth carried Luca in her pocket until Melody discovered the pup.

“I couldn’t believe it. I had said to her, ‘You know what, honey? I’m not ready for a dog right now. But when we are, I want it to be a rescue, I want it to be a female, and I want it to be an adult,’” Melody says. “Those were the only three limitations I gave her and, sure enough, she bought a male puppy. So she went against all of my wishes. But of course I promptly fell in love with him.”

Melody’s pooches are top dog around the house, going where they want and mixing with the family. And that includes the bed, where the pups love to cuddle. When Melody first brought Reilly home, she made a nest on the floor by the bed. On the fourth night, her husband said, “Oh, put her in bed for heaven’s sake.” 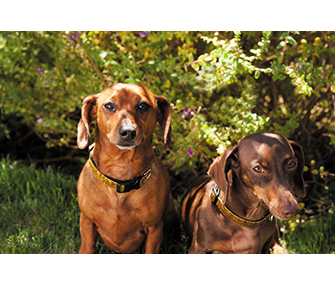 “And so that was that. She sleeps in the bed, and if I decided to sleep for 16 hours, she’d just sleep right along with me. She doesn’t move. She doesn’t wake up, unlike Lola. Lola will say, ‘Pant, pant. It’s 5 a.m., I’ve got to get up.’ Reilly will just sleep until I get up. So she’s perfect.”

As for expanding her furry family, Melody says she doesn’t have immediate plans to adopt more pets, but she’s not ready to close that door.

“I always believe that whatever dog I’m supposed to have in this life will find me, or I will find it. And I was just starting to get that feeling again when my husband said, ‘Come on, get in the car. We’re going to the pound.’ God will bring me my next dog.”

This article originally appeared in the Summer 2015 issue of HealthyPet magazine.

View Next Article: On the Prowl for Adventure: 7 Ways to Enrich Your Indoor Cat's Life