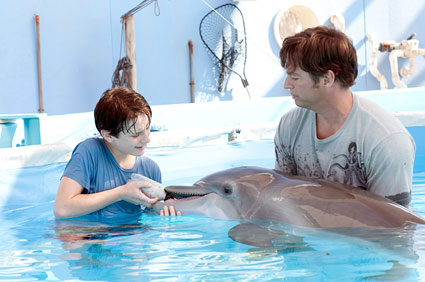 Whether you are a mother, an animal lover or just a softie, you’re going to tear up at least once during Dolphin Tale. (I’m just warning you, in case you want to get your emotion force fields up!)As everyone knows by now, the movie is inspired by the true story of Winter, a young dolphin who lost her tail to a crab trap.

For a baby dolphin to survive such an incident is a miracle.But this young dolphin was even luckier when a skilled team of caretakers and creative prosthetic engineers set out to restore her natural functionality.If you take that true story and add a champion athlete, a motherless girl, and a troubled, fatherless child into the mix, you have the makings of a real tearjerker.

Since I am a veterinarian, people ask me what I think about the medical and scientific accuracy of the film. To be clear, it isn’t a documentary — television and movie executives often use theatrical license to tell a story and, as expected, Dolphin Tale does just that. The movie covers a lot of ground in a couple of hours, which translates into broad brushstrokes and little detail.

In reality, it took Winter’s trainers months of tedious exercises to gradually get her to accept the prosthesis — not the few false starts depicted in the movie. Winter mimics the whistle sounds of the boy in the film, but animal experts know that this is trained behavior, as opposed to a sudden magical attachment.

The characters handle Winter a great deal in the movie, but the truth is that dolphins are extremely sensitive to touch, so the scenes of the boy hanging all over her made me wonder what Winter really thought. Plus, allowing a child to go unsupervised in a tank with a dolphin is irresponsible and dangerous, although I understand why it's in the movie. It’s a fun fantasy to portray in a world in which we often take the adventure out of kids’ lives. 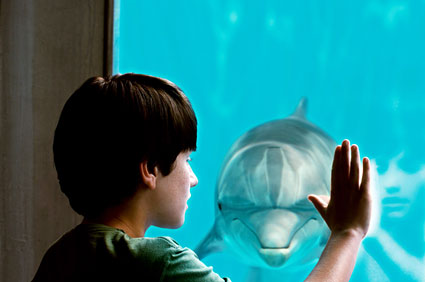 Even with those observations, I found the story compelling. The movie does make you want to save the emotionally wounded kids from another great loss, convince the recently disabled there is hope, and prevent the aquatic animal rescuers from closing up shop for lack of funding. If you turned down the volume on the human emotional experience and turned up the accuracy, you’d have a documentary — instead of soulful sax notes from Harry Connick Jr., a poetic recitation by Kris Kristofferson, and another heartfelt performance by Morgan Freeman.

The suffering that other creatures experience at our hands is often overwhelming, but a small slice of an individual’s story, such as getting a glimpse into what Winter went through, is compelling. This movie inspires us to think that perhaps we can make the world a better place, and in doing so for one creature, possibly even pass along the gift to many.

Find out which pets are your best… ›
READ MORE: Exotic Animals, Animal Movies