November 15, 2011: We've scoured the Web to find the best and most compelling animal stories, videos and photos. And it's all right here. 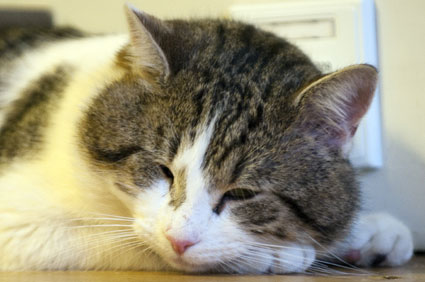 AP
Larry the cat is a welcome addition to 10 Downing Street — even if he may be a bit lax about his duties as resident mouse catcher.

Is Larry the Cat Asleep on the Job at 10 Downing Street? Despite reports that a mouse recently crashed a dinner hosted by Prime Minister David Cameron at London’s famous No. 10 Downing Street, calls for Larry to resign his post as resident mouser have been “rebuffed,” says the BBC News. Larry, who was adopted from a shelter to help with a rodent problem at the celebrated address, still "brings a lot of pleasure to a lot of people," said Cameron’s spokesman. — Read it at the BBC News

Poll Finds That Most People Get Pets as Gifts or Strays

A new AP-Petside poll reports that about four in 10 pet owners received their current pet as a gift. Another third of respondents said their pet was taken in as a stray, followed by adoption from a shelter, and buying a pet from a breeder. The poll also found that more than half of Americans have rescued an animal from a shelter at some point. — Read it at the Petside

Dog is Euthanized Just Hours After Going Missing in Virginia

In a sad end to a long life, a Virginia couple said that a few hours after their 17-year-old Corgi/Border collie mix named Basie went missing from their yard, she was euthanized at a local animal shelter. Police said the woman who found Basie and the vet who performed the procedure "appeared to be doing what they thought was right." — Read it at the Huffington Post

Bromancing Penguins Will Embrace Again in the Spring

Following outcry last week over reports that a Toronto zoo plans to separate a loving pair of male African penguins, the zoo clarified that “if Pedro and Buddy wish to get back together, they will be welcome to do so” — after mating season for the endangered birds ends. — Read it at Today

Lab Days May Soon End for Research Chimps in the U.S.

The World’s Most Massive Canine Litters

Inspired by the recent announcement from the Duggar family that they’re expecting their 20th child, People Pets put together a gallery of some of the world’s largest doggie families. Take a look at these adorable piles of puppies. — See the pictures at People Pets