November 10, 2011: We've scoured the Web to find the best animal stories, videos and photos for you to chew on. And it's all right here. 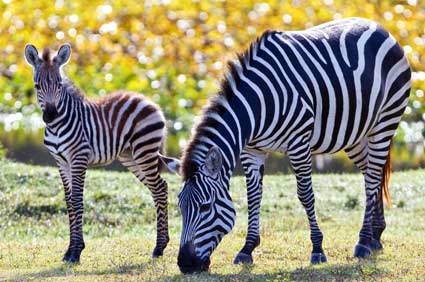 Baby Zebra Shows Her Stripes at Busch Gardens Zoo A beautiful Grevy’s zebra was born at the Busch Gardens Tampa Bay zoo on Friday – and within an hour, she was out grazing with her mom and running with the rest of the herd. The zoo has had a baby boom recently, welcoming a male Cape buffalo and a female Sable antelope to its Serengeti Plain. -- Watch video at Tampa Bay Online

Plus: A trio of month-old lion cubs made their debut at the Santa Fe Zoo in Colombia last week. – See photos at People Pets

The American Veterinary Medical Association’s education council called for a requirement that veterinary schools adopt a system of assessing students after they graduate as a way of improving their college programs. Outcomes assessment would become a requirement for accreditation through the AVMA. -- Read it at DMV360

Can Pet-Friendly Décor Be Stylish?

A Los Angeles-based interior decorator offers advice for advice for having both style and furry friends. Some of her ideas? Choose furniture that’s the same color as your dog or prints that hide dog hair, avoid fabrics like velvet that show dirt and hair and avoid wallpaper, which can be hard to clean. -- Read it at the Wall Street Journal

Occupy Denver Elects a Dog as Its Leader The movement’s official leader is now a 3-year-old Border collie and cattle-dog mix named Shelby, who’s been at the city’s protests every day for a month with her owner. “She’s the youngest leader of a revolution in history and the first of any occupation so far, but she’s smart, so people know she won’t make any situations,” said one protester. -- Read it at Time

Two filmmakers on the Shannon River in Ireland caught a spectacular bird murmuration on video. -- Watch it at Today

A Westchester, N.Y., bird watcher had quite a spotting in a lake near his home: a pink flamingo. Knowing the bird wouldn’t survive frigid overnight temperatures, Chris Evers managed to bring it home and keep it in his bathtub. Evers, who deals with exotic animals professionally, was able to contact the bird’s grateful owner, a private zoo operator, with information from a tag on its leg. -- Read it at the New York Post

A Preschool for Apes in Malaysia

The Today show went behind the scenes at the Sepilok Orangutan Rehabilitation Centre in Malaysia, which is often called “orangutan preschool,” baby apes who’ve lost their mothers are taught survival skills. -- Watch it at Today