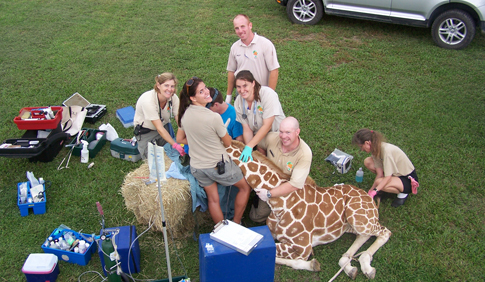 At Lion Country Safari in Loxahatchee, Fl., a team of veterinarians, veterinary technicians, and animal keepers help keep a 4-month-old giraffe immobilized while a torn eyelid is repaired. Mary Ellen Goldberg is at the tail of the giraffe, helping monitor the giraffe’s vital signs.

Caring for dogs and cats can have its share of unpredictable moments, but Florida-based veterinary technician Mary Ellen Goldberg says that working in a zoo is, well, a completely different animal. “It is never Mrs. Jones bringing Fluffy in for a routine checkup,” she says. “Every day, I experience something that just amazes me.” As a part-time veterinary technician at Lion Country Safari in Loxahatchee, Fl., Goldberg has cared for everything from antelope to zebras. While stressing that no day is typical, she says collecting samples and assisting in surgery are two of the main duties of a zoo veterinary technician.

Due to the scarcity of positions, zoo technician jobs are among the most competitive in the veterinary technician field. Goldberg has spent 35 years in the profession, working at a research lab and a private practice. “I loved both of those positions, but I’ve always wanted to work at a zoo,” she says. “When they had a temporary position open, I jumped at the chance and have loved every minute of it.” Goldberg has actually done several part-time assignments at Lion Country Safari and really likes the change of pace, but she admits that the biggest challenge in dealing with zoo animals is not getting too comfortable with them: “They have learned to accept people, but even the most docile ones can revert to their wild instincts in a minute.”

For that reason, the animals must be restrained to be examined. “Sometimes, we can have one of the keepers hold them, or we can get them into a chute, so we can look at them,” she says. “Other times, they must be sedated.”

Unless it’s a complicated operation, Goldberg says the animals are typically treated in the field, as opposed to being brought to the hospital. It’s the veterinary technician's job to prepare the equipment for surgery, and then assist the veterinarian during the procedure. “Each case comes with its own unique challenges,” she says. Recently, Goldberg assisted in a procedure on a baby giraffe that had injured its eyelid on a fence. “We had to go out and immobilize the baby, which meant mama had to be separated,” she says. “What we did was leave the mother nearby and put a fence up, so that she could look over and see the baby.”

The baby giraffe was then put under anesthesia, so that the ophthalmologist could repair the eyelid. While the giraffe was under, Goldberg and other technicians kept a close watch on the vital signs. Afterwards, the 4-month-old giraffe was groggy for a little bit, but was just fine.

Assisting in a procedure is exciting, but Goldberg says she’s equally fascinated just watching and interacting with the animals. She says she discovers something new every day: “For instance, who knew that rhinos like to be scratched behind their ears?”