October 26, 2011: We've scoured the Web to find the best animal stories, videos and photos. And it's all right here. 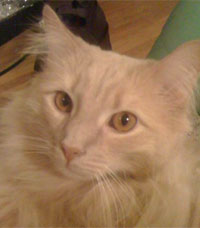 Facebook
Jack the cat somehow managed to survive two months on the lam at JFK.

Missing Feline Surfaces at JFK Airport It's been two months since Jack the cat went missing at New York’s JFK airport, but the wayward feline has finally been located: American Airlines announced that Jack was discovered “safe and well” in the customs room. His owner was immediately notified, and Jack will be flown home to California. “At this point, we are pretty certain that this IS Jack!!!!” read his Facebook page. — Read it at ABC News

Meet the next stars of the Internet. This 6-month-old baby girl thinks it’s hysterical when her family’s French bulldog snores beside her on the couch. — Watch it at the Huffington Post

Pit Bull Receives a "Neighbor of the Year" Award

You often read about people filing complaints against pit bulls, but a community in Atlanta decided to award Titan its “Neighbor of the Year” award for saving his owner’s life. One morning in July, Titan stopped John Benton from leaving for work by barking, blocking the door, and running up and down a flight of stairs. When Benton followed the dog to his bedroom, he discovered that his wife, Gloria, had suffered a brain aneurysm. If not for Titan, Gloria may not have survived the medical emergency. — Read it at the Huffington Post

Study Shows Coyote-Wolf Hybrids are Common in the U.S.

According to a study published in the Journal of Mammalogy, scientists have uncovered through DNA research that coyotes who migrated into northern Virginia bred with Great Lakes wolves along the way. Now, coyote-wolf hybrids are prevalent in parts of the U.S. Researchers say that changes in the ecosystem brought on by humans are to blame for the animals’ migration from their native homes in the Plains and deserts of the Southwest. — Read it at Science Daily

When Garrison’s new family brought him home, they found a sweet message tucked in with his adoption papers — a PostIt note from a child in the pup’s foster family that read “Please will you take care of Garrison.” — See the note at Paw Nation

Only in Alaska. One very smart black bear cub discovered a place where foraging for food is easy: the produce section of a grocery store. After checking that mama bear wasn't around, one brave customer grabbed the cub and helped police bring it back outside. — Watch it at Discovery News

From a city bus to a Dachshund dinosaur — not to mention a Princess Beatrice — these dogs stole the show on Monday at the annual Halloween parade in Tompkins Square Park in Manhattan. — See the photos at Life

Plus: Pet owners are expected to shell out $310 million on costumes for their furry friends this Halloween. Curious about the 10 most popular looks? — Read it at DMV360

Find out which pets are your best… ›
READ MORE: Dogs, Cats, Animal News