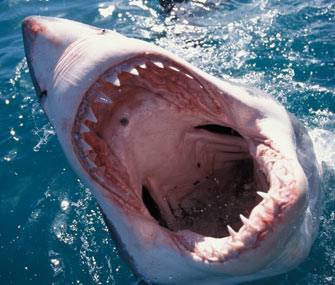 Brandon Cole Marine Photography / Alamy
Scientists have uncovered a curious fact about shark teeth: They are coated in 100 percent flouride.

Do You Hate Going to the Dentist?

Then you should be jealous of sharks. When you're a top predator, your teeth are your most important tool, so sharks make sure that they never run out. If a tooth falls out, it's not an issue because sharks have rows of replacement teeth.

And it was recently discovered that the surface of shark teeth is 100 percent fluoride — the same ingredient that's added to toothpaste to make your own teeth strong.

Do You Practice Yoga?

Then you'll admire the amazing flexibility of sharks, due to the fact that they have no bones. Shark skeletons are made of cartilage, the same material that makes up your nose and ears. "Many species of shark are flexible enough that, if you grab their tails, they will be able to turn around and bite your hand," Shiffman says.

Are You Always on the Go?

Sharks also need to move to avoid sinking because they lack swim bladders, which make other fish buoyant.

Are You Amazed By What Mothers Can Do?

"There's amazing diversity in relation to where baby sharks come from," Shiffman says. Some species lay eggs, some give birth to live young and, for some, it's a combination of the two — the eggs fertilize, develop and hatch inside the female.

If need be, the female can even have babies without help from a male, as scientists discovered when a lone hammerhead shark gave birth at an aquarium in 2001.

Do You Have a Soft Spot for Endangered Animals?

Humans kill millions of these creatures each year. It's estimated that 26 million to 73 million of them are victims of the shark fin trade. And contrary to what some people believe, the fins do not grow back.

Are You Afraid of Dangerous Animals?

Then you should love sharks! Humans have only a 1 in 3.8 million chance of being killed by a shark — you're more than 25 times more likely to be taken down by a cow!

"Many people think sharks are mindless killing machines that will attack any human they see," Shiffman says, noting that most sharks actually mind their own business. "Any time that you go to the beach, there are sharks nearby, but they don't bother you." To prove this, he would catch small sharks with his hands to show to fellow beachgoers.

You may be thinking to yourself right now, "Remind me not to go to the shore with David Shiffman." His reply: "You should be terrified" about going to the beach because your chances of dying in a car accident on the way are much higher than the chances of even seeing a shark.