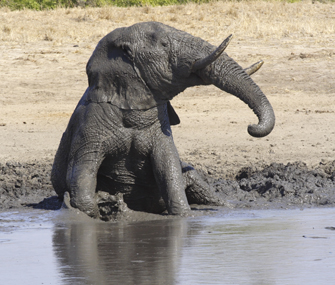 Thinkstock
Elephants opt for mud masks to keep themselves cool when the temps rise.

During these recent heat waves, it’s been so hot that staying confined to the air-conditioned indoors — within reach of a pitcher of ice water — has turned into the preferred summer pastime this year.

But what happens to animals who don’t have the benefit of fans and air conditioning during these unbearable spells?

At zoos, caretakers can keep animals cool with tricks like “bloodsicles” for jungle cats. But in the great outdoors — especially steamy spots like Florida — wild creatures have to use whatever devices are innate to their species to stay chill, such as limiting energy-sapping activities like hunting to the early morning and late afternoon, when the sun isn’t as intense.

Ron Magill of Zoo Miami let us in on some other facts about how animals in the wild beat the sweltering heat:

1. Elephants . . . often coat themselves with dust or mud to protect their skin from the sun.

2. Dragonflies . . . who have thicker bellies position their abdomens at a 90-degree angle to the sun in order to shield themselves from the full-on intensity of the rays. 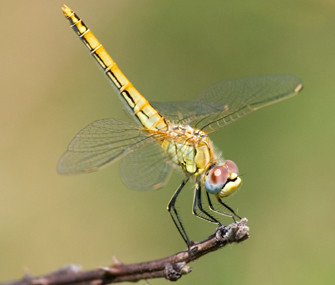 Thinkstock
Dragonflies position their bellies in a special way to ward off the sun's powerful rays.

4. Coyotes, foxes and dogs . . . pant to cool their bodies down, dissipating heat as water vapor.

5. Butterflies . . . cover their midsections in the shadow of their wings to keep their body temperatures in check.

6. Tigers . . . will lie down in ponds or rivers. So much for cats hating water!

7. Reptiles . . . who are landlocked burrow into the cool earth, since their cold-blooded body temperatures are regulated by their environment.

10. Vultures . . . defecate on their own legs. The subsequent evaporation process helps them to cool off.

Our animal cool-down facts were provided by the following: Ron Magill of Zoo Miami and theHouston Chronicle.