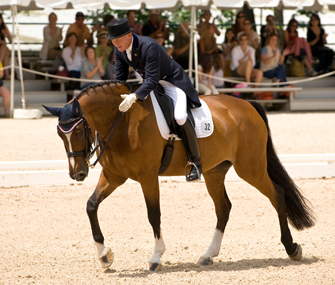 For most people, the mention of Mitt Romney and four-legged friends will likely conjure images of Seamus, the Irish Setter whom the candidate once strapped to the roof of his station wagon during a family road trip.

Thankfully — and likely to his relief — a new animal-related story has broken about the presidential candidate: His wife, Ann Romney, co-owns an Oldenburg mare named Rafalca who's made the Olympic dressage team.

A Little Lesson on a Sport With Royal Roots

Dressage, which is derived from the French word for training, is loosely described as “horse ballet.”

“Dressage was originally an art form and performance, a form of entertainment for the kings and queens of Europe,” explains Laurie Joliffe, trainer and owner of Excel Dressage in Pennsylvania. “It’s fascinating because you don’t see a whole lot of movement from the rider, but the horse is dancing. The growing popularity of the sport has brought it more into the realm of competition.”

Interest in the elite sport hardly helps Romney’s “regular guy” image. In fact, as TV personality Stephen Colbert noted ironically last week after Rafalca competed in the first trials, “The image of Romney as a privileged princeling ends today, because Mitt is just your average, blue-collar fan of dressage.” In the same video, which promptly went viral, the satirist also donned a trucker hat and a foam finger to root for Rafalca.

All in good fun, the United States Equestrian Federation responded with their own montage video of fans preparing for the competition — all waving “Dressage Is #1” foam fingers. Colbert continued the riff, dancing behind his desk dressed in a horse head and hooves (see below video).

Either way, Joliffe thinks Ann Romney’s interest in dressage, and Colbert’s attention, are both positive because they bring focus to the sport: “I’ve seen the skits, and they’re hysterically funny because Colbert isn’t mocking the actual sport. They're putting the limelight on dressage.”

1. Classical dressage, which initially wasn't a competition but an art form based on training for the battlefield, first came to prominence during the Renaissance.

2. The horse and rider perform in a 20 x 60 meter arena, marked by a series of letters that indicate where specific movements should be done.