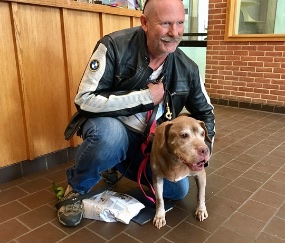 Humane Rescue Alliance
Julep, who's 18, was quickly adopted after her owner passed away.

Julep has lived a long and happy life. But when her owner died and the family couldn’t take her in, the 18-year-old dog wound up at the Humane Rescue Alliance in Washington, D.C. — becoming one of the oldest residents the shelter has ever had. They put the word out on Facebook, and Wayne Lerch, whose 11-year-old dog had passed away in December, was at the shelter waiting to adopt Julep before it even opened on Tuesday. “I couldn't let her spend one more night in the shelter,” Lerch said. “We see a lot of happy endings and try not to get too emotional,” said shelter spokesperson Alix John Tolley. “But the combination of her age and Wayne’s obvious adoration for his new 'old lady' left us in tears.” Julep has been renamed Tootie after Lerch’s grandmother and she’s “happy as a pig in slop,” her new owner said. — Read it at Today