2-Legged Chihuahua Gets a New Lease on Life 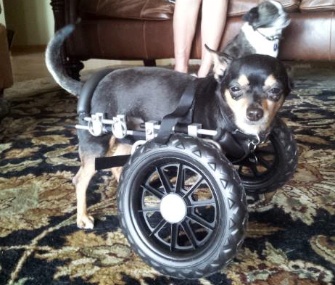 Little Groby Pedroni is getting a new start after being rescued from a hoarder who kept more than 40 dogs in her home.

Not even the next-door neighbors in the woman’s Los Angeles suburb knew that she had the dogs because they had never been outside or had any medical care, according to Groby’s Facebook page.

Because of the inbreeding that happened in the home, Groby, a 3-year-old Chihuahua, was born without front legs. (Several of the dogs in the house suffered from birth defects.)

The dogs were removed from their environment in 2012, and Groby spent the next 10 months being fostered at the Hope Ranch Animal Rescue before being adopted in March.

Groby has been fitted with a new set of wheels to help him get around, and he’s needed surgeries on his hind legs. The first operation at the University of California-Davis took place last week, and in the next few months, he’ll undergo surgery on his other leg.

Fortunately, the community pitched in to help Groby, raising money to cover the cost of his operation, reported Dogster.

Groby’s owner hopes that the little dog will soon be off and running.