Home ›
Our Pet Experts ›
Dr. Ann Hohenhaus ›
24 Hours in the Life of a Veterinary Oncologist

24 Hours in the Life of a Veterinary Oncologist 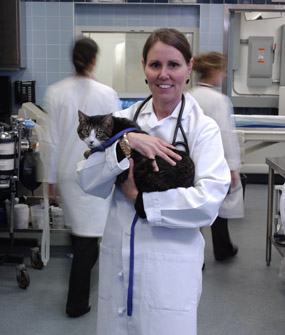 Dr. Ann Hohenhaus with one of her patients.

Although I love to write, I also have a day job taking care of pets who are battling cancer at The Animal Medical Center, a teaching hospital in New York City.

It can be an incredibly rewarding — and, at times, emotional — profession, which is why I'm combining my love of writing and doctoring to give you a glimpse at what 24 hours is like in the life of a veterinary oncologist.

Whether it's a Bulldog with a faulty ticker or a true canine fighter (who happens to bear the same name as a tough-as-nails champion boxer), it's never a dull day at my cancer clinic.

Senior cats often have more than one disease, and my first patient of the day, a 12-year-old kitty named Sasha, is no exception.

At one time she had been very overweight, which led to diabetes. Recently, she had surgery to remove a benign uterine tumor — which is extremely uncommon, since most cats are spayed as youngsters — and it was discovered during this surgery that she also had a common type of feline cancer called lymphoma in her intestine, lymph nodes and liver.

Lymphoma is the most common type of cancer we see in cats, affecting mostly older kitties, but we occasionally diagnose it in younger felines as well. This form of cancer typically responds well to chemotherapy for a while, but it's rare that we can cure a cat of the disease.

The lymphoma had left her deficient in a B vitamin known as cobalamin. Following surgery, her pancreas became inflamed and she refused to eat, complicating the management of her diabetes.

To help remedy this complex yet common situation, we placed a feeding tube in order to provide Sasha with adequate nutrition. We also tackled the issue of the cobalamin deficiency with a small volume of weekly vitamin injections — a solution that worked well since her family was already giving her insulin injections.

Today's big discussion centers on how best to treat Sasha’s cancer, given her multiple problems. Since she has shown significant improvement, thanks to the feeding tube and the vitamin supplements, we talk about two chemotherapy options for the owner to consider over the next few days: pills given at home, with monthly rechecks, or intravenous chemotherapy given at the hospital by the oncology staff. Cat owners tend to like the first option, but not all cats respond to this treatment, and oncologists (me included) never like to risk undertreating a patient.

My next patient of the day, Tyson, a black-and-white dog of no particular breed, has been performing just like the champion boxer he's named after while on chemotherapy. Like Sasha, the 10-year-old has the canine form of lymphoma — but unlike Sasha, lymphoma is this pup's only problem.

Six months ago, he started what is considered to be the gold standard for the treatment of canine lymphoma: weekly intravenous injections of the same type of chemotherapy drug that's given to humans with lymphoma.

About 85 percent of dogs treated with this protocol will experience a remission. Although we wish the response rate was 100 percent, it's still pretty good when you're dealing with a tough cancer like lymphoma.