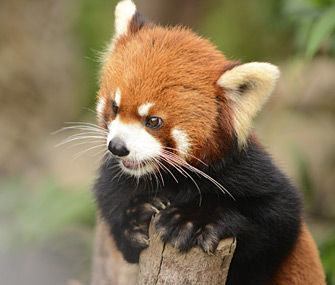 September 20 is International Red Panda Day. To celebrate, we spoke to Nicki Boyd, behavior husbandry manager at the San Diego Zoo and chair of the board of Red Panda Network, about how cool these animals are and how the organization works to conserve them.

Here are five facts we bet you didn't know about these fascinating creatures.


When you hear "panda," everyone tends to think of that big black and white bear, but the red panda had the name first. "They were discovered first, about 50 years before the giant panda," Boyd says.

Panda is probably derived from a Nepalese word meaning "eater of bamboo," but because red pandas range over many countries in Asia, they also have many local names. One nickname may be familiar if you use a certain Web browser: That little animal in the logo for Firefox is a red panda. "It's one native name for them, because of the coloration and the big bushy tail," Boyd says. Another name is "wah," in imitation of one of the sounds they make.

But the two pandas have some interesting similarities because they've evolved to suit the same lifestyle — what naturalists call convergent evolution. Both are classified as carnivores, so their closest relatives are meat eaters, yet both live mainly on bamboo. "Both have a false thumb that allows them to grip and hold the bamboo," Boyd says. It's called a false thumb because it evolved from a bone in the wrist; it's not the same structure as the thumb on creatures who have five digits. (Both pandas have five fingers, plus that extra bone.)

The climate red pandas live in is cold, so even the bottoms of their feet are covered with the thick fur that insulates their bodies. They also spend a lot of time in trees, so they've got special adaptations for climbing."They have semi-retractable claws that are super-sharp — they're almost catlike in the way that their claws work," Boyd says. "And when they want to climb down, they can rotate their rear feet to grip the tree as they head straight down."

They also have a variety of interesting vocalizations. "They have a chittering that sounds like a bird chirping. And if they're cornered, they let out the loudest sound, called a huff-quack — it sounds like a big bear is in the room. It scares the daylights out of you," she says, "and then you think, Whoa, that came out of that little animal there?"