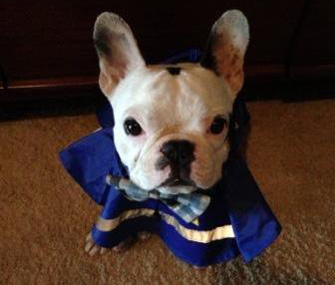 Courtesy of VPI
Pierre the French Bulldog got into double trouble at a Fourth of July party.

Just about everyone loves to be out and about in the summer, and that includes our pets. But the long days filled with sun and fun also leave lots of room for accidents. That seems to be most of what we found at Veterinary Pet Insurance when we went looking for the five most unusual claims of the summer.

We already have a system in place for finding unusual claims, since we choose one every month from tens of thousands as our Hambone Award nominee. The award is named in honor of a VPI-insured dog who got stuck in a refrigerator and ate an entire Thanksgiving ham while waiting for someone to free him. (The dog was eventually found, with a licked-clean hambone and a mild case of hypothermia.)


I went back through our Hambone Award nominees and picked the fivesummer entriesI thought rose above the rest. I’m not picking a winner, because thesepets are already winners as far as I’m concerned: They all survived. In no particular order, here are my top five.

Wet and gassy: Pierre the French Bulldog was a twofer as far as calamity goes, managing to get himself into trouble twice at a Fourth of July party. First, he fell into the pool and sunk to the bottom (like many short-nosed, heavy-chested dogs, Frenchies typically aren't good swimmers). After he was rescued, his owners put him inside to keep him from getting into any more trouble. But Pierre had other plans: He helped himself to some chocolate chip cookie dough. He was later treated for shock and excessive gas.

Flattened by a door: Cats can pick some bad places to nap, and tiny Ariel is no exception. The cat found herself smashed by a garage door that her owners unwittingly closed on her after they finished their outdoor chores one weekend. They didn’t realize their mistake — they’d already gone inside — but a neighbor heard the cat crying and got help. Ariel’s owners freed her, but the cat collapsed soon after. They rushed her to the veterinary hospital, where she was diagnosed with liver damage. She bounced back quickly and was released the next day.

Got his goat: Curiosity is purported to have threatened the lives of many cats, but nosy behavior can get dogs in trouble, too. That’s what happened when a Retriever named Chance got a little too close to a neighbor’s goats as the dog’s owner was trying to herd the wandering animals back where they belonged. Baby goats may be darlings of the Internet, but adults can be aggressive, as Chance found out when he was broadsided and knocked into the fencing by one of the animals. He got off lightly with an infection where his nail was caught, but chances are he’ll never mess with goats again.

Take the elevator next time: Kei the Shiba Inu was on vacation with his owner and heading up the escalator after a ride in the Toronto subway when his nail got caught in the grating. The dog’s stoic nature was such that he didn’t cry out, and the injury wasn’t noticed until Kei started licking his paw. After a Good Samaritan helped the dog's owner find the closest veterinarian, the dog was sedated for examination. The injuries weren’t minor: The nail beds were damaged, and the paw pad was lacerated. Kei was released about six hours later and spent the rest of the trip riding in his owner’s shoulder bag.

That’s a nasty sting: The list wouldn’t be complete without a beach injury, would it? Anyone who has ever felt the sting of a jellyfish knows the pain of Ranger, a Westie-Poodle mix, who was injured by a Portuguese man-of-war, a related invertebrate. While engaged in a rowdy game of fetch, the dog stepped on the creature after it washed up on the beach and was stung on the paw. At his veterinarian’s office, Ranger received a dose of anti-inflammatory medication, an antihistamine and a shot of pain reliever. He was lucky: The sting of the creature can be highly dangerous.

Those are some of the more unusual claims of summers past, but we know we’ll continue to see plenty of accidents before Labor Day. Of course, pets get themselves into trouble all year round, and you can read about our other Hambone Nominees and their escapades on our Hambone Nation blog. We welcome your vote for the Hambone Award winner of 2014. In the meantime, in the summertime or anytime: Stay safe!