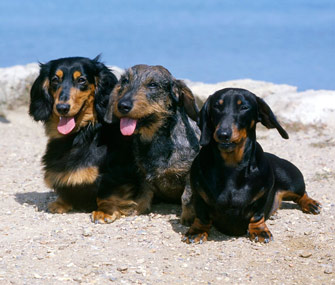 Sally Anne Thompson, Animal Photography
The Dachshund comes in a few coat types: longhaired (left), wirehaired (center) or smooth (right).
The popular Dachshund may be small, but he tends to have a big personality. He’s generally active, athletic and spirited. Learn more about this short-legged, long-backed Hound and find out if he might be the right dog breed for you.


He can make a good watchdog.

Don’t let the Dachshund’s diminutive size fool you. He tends to be alert and wary of strangers, and he’s got a big bark.

He comes in two sizes.


His temperament often matches his coat.

He tends to love eating.

Voracious is the best word to describe most Dachshunds’ appetites. The best way to help prevent obesity is to measure your Dachshund’s food, treat judiciously and keep food and garbage out of his reach.


He needs a moderate amount of exercise.

Take this breed on a couple of short walks daily or let him race through an agility course (overall health permitting — these little guys are known for having back problems). Depending on his temperament, he may also enjoy being a therapy dog in a nursing home or hospital.