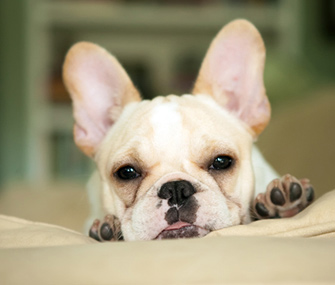 The French Bulldog is a pretty popular guy with celebrities like Martha Stewart and Carrie Fisher, and there are many famous Frenchies on Instagram. It’s not hard to see why he’s so well liked: He’s got an adorably wrinkled face, signature bat ears and a bow-legged gait. Learn more about this companionable dog and see if he might be the right breed for you.

Generally charming and clever, the Frenchie is known for his sense of humor and silly antics.

They can be a good choice for couch potatoes.

The Frenchie tends to be restful and usually doesn’t need a ton of exercise. A daily walk may be enough to keep him in shape. Be sure he doesn’t get overheated — Frenchies are sensitive to heat and can succumb to heatstroke quickly.

They can be good for apartment dwellers.

Frenchies are small, generally weighing less than 28 pounds, and they’re typically quiet. That makes them a popular choice for people who live in apartments or condos.

The Frenchie tends to love his people — in fact, he tends to love just about everyone he meets. However, he may not always get along with small children or cats.

They can be snorers.

You’ll likely know when the Frenchie is taking a nap — this brachycephalic breed tends to snore, snort, grunt and make other odd sounds.