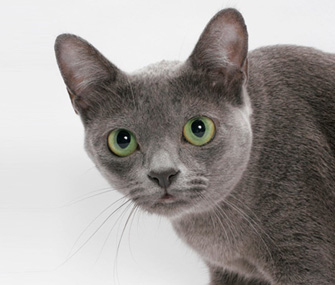 Tetsu Yamazaki, Animal Photography
If you encounter a Korat, consider yourself lucky. He's a symbol of good fortune and prosperity in his native Thailand.

The silvery-blue Korat, a symbol of good fortune in his native Thailand, is often a demanding but loving cat who tends to be devoted to his people. Learn more about the Korat and whether he might be the right breed for you.

They tend to take charge.

The Korat generally loves attention and he tends to think he’s the boss, whether of other cats, dogs or family members. He may prefer the company of other Korats to other pets, but he tends to be affectionate with his people and calm with children.

Don’t be surprised if the Korat wants to be closely involved in everything you do. When you’re home, he’ll probably want to be near — or on — you. He’s generally a gentle cat who likes to snuggle.

Get to Know the Korat

They usually know how to express themselves.

Although he's typically less talkative than his Siamese cousin, the Korat often knows how to tell you what’s on his mind, both verbally and through his body language. A quiet, happy chirp usually indicates his satisfaction… and you will probably know if he doesn’t approve of what you’re doing.

They tend to be energetic.

The Korat is often a playful cat who can be highly intelligent. Keep him busy and stimulated by teaching him tricks and giving him puzzle toys that will reward him with kibble or treats when he manipulates them correctly.

They have a distinctive appearance.

The Korat has blue-gray fur that glistens like silver, green or amber eyes and a heart-shaped head. However, he’s slow to mature — he may not reach his full physical and emotional development until he is 5 years old. For instance, his eyes may not achieve their luminous color until he is between 2 and 4 years old.