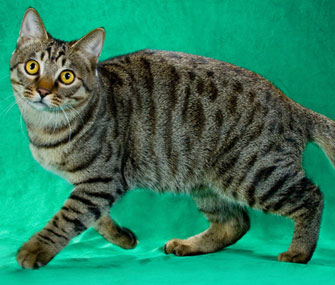 Larry Johnson
Rats usually don't stand a chance against the Li Hua. The breed is known for his superior ratting skills.

This typically people-loving cat native to China tends to have an amiable temperament. He's known for his smarts and typically forms a strong attachment to people. Learn more about the Li Hua and whether he might be the right cat breed for you.

They're known to have Olympic gymnastic skills.

Here’s how the breed standard describes the Li Hua’s agility: “The Li Hua should be able to jump in the air and turn around twice before landing." Of course, not all cats in this breed may be so inclined, given differences in genetics and physical health.


They often have gentle dispositions.

The Li Hua tends to be a friendly cat who will often act as a family caretaker — not only of people but also other cats. He can even get along with dogs.

Chinese lore claims that one Li Hua owner, Zhao Shangzai, trained his cat to fetch the daily paper. The Li Hua tends to have a good memory and an analytical nature — that means you’ll need to stay a step ahead of him to help keep him out of trouble.


They can be excellent ratters.

In China, the Li Hua’s job is to catch rats and protect crops and grain. His reputation is so good that this ability is even called out in the breed standard, which says “No rat can escape its sharp claw, agile body and strong neck.”


They tend to be sturdy.

The Li Hua usually weighs 8.5 to 11 pounds or more. He tends to have a strong body, big paws, a muscular tail and a wide, diamond-shaped head.