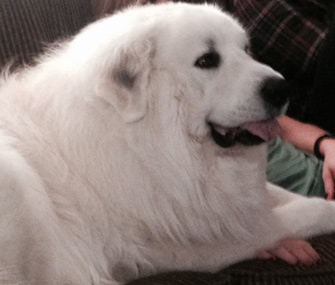 Courtesy of Debra Cramer
Debra Cramer is often asked, "What is that thing?" It's a Great Pyrenees named Leo, if you were wondering.

If you saw a parent walking with their remarkably tall teenager down the street, chances are good you wouldn't run up and start grilling them about their child's eating habits or health issues. But, switch that remarkably tall child with a remarkably large dog, and for many people, no question is too personal.

We spoke to a few owners of large and giant breed dogs to find out about some of the odd questions they're asked on a regular basis.

That is a Big Dog!

"What is that?" When you have a dog that's extremely noticeable, but not necessarily recognizable to the general public, you hear this a lot. And yes, it's often phrased just like that. And, answering with "a dog," doesn't generally make you many friends. Debra Cramer, who lives in Sunfield, Michigan, fields this question on a regular basis when she's out with her Great Pyrenees, as does Kelly Whitney of Venice, Florida, the owner of two English Mastiffs who people sometimes mistake for extremely large Boxers. If you have a giant dog, you'll fare best if you're passionate about the breed and come loaded with some fun facts, or, at the very least, are prepared to talk about your pup's weight, height or coat.

"Do you have a saddle for that thing?" This was the top question for the Great Dane owners with whom we spoke. "I usually say that I left it at home," saysApril Kuzma-Armour, Jenison, Michigan. This question comes with a few varieties, too, including, "If you get tired of walking, can you just ride her home?" which was one thatMeredith T.of Raleigh, North Carolina, heard all the time with her Great Dane, who she had for 10 years. (The answer, of course, is no.)


"How much does he eat?" While it's true that a giant breed dog will go through more kibble than, say, a Pug, the full answer isn't always as exciting as people might expect. "I thought Leo would eat us out of house and home, but he's not one to gobble his food," says Cramer of her Great Pyrenees. "He just gets a couple of scoops a day." That may seem harmless, but the question frequently takes a more personal (and somewhat less appropriate) turn when people ask, "How much does it cost to feed him?" How much does it cost to drive your SUV into the city and back for work each day, or to buy a latte every morning? Probably nobody's business, right? (And for the record, giant breed dogs will typically eat between four and six cups of food per day, depending on their size and the type of food. So, now you know!)

"How big is his poop? Who has to clean it? Do you need a wheelbarrow to carry it?" There are almost endless comments that can be made about dog poop, and giant breed owners have heard them all. (And if they're lucky, they can answer the way Kuzma-Armour does: "I'm lucky because my son picks it up!")