Cats and dogs are wonderful for their companionship, affection and unconditional love, but as much as we hate to admit it, they’re not always the easiest to live with. Behaviors like barking, pulling on the leash and scratching can cause stress and injury. Plus, simply being near a pet can bring on the sniffles or make you sick. Thankfully, many of those injuries and illnesses can be prevented.

Here are seven common ways cats and dogs can negatively impact your health — and what you can do to help fix them. 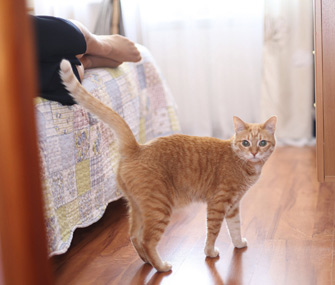 Thinkstock
If your cat is keeping you up all night, she probably needs more enrichment during the day.

Your Cat’s Nighttime Adventures Are Ruining Your Sleep

You’re not the only one who tosses and turns at night while your cat runs around the room, scratches at the door or cries loudly. According to a recent study by the Mayo Clinic, 10 percent of pet-owning patients who visited the clinic’s sleep center reported that their pets disturbed their sleep. That may not seem significant, but in a similar study in 2002 by the Mayo Clinic, only 1 percent of pet-owning patients reported disturbed sleep from pets.

Thankfully, it is possible to get your cat on your sleeping schedule. Dr. Marty Becker recommends changing your cat's mealtime from morning to night, making more time for play and adding enrichment to his environment with food puzzles, window perches and even cat videos. And if you want to stop your kitty from waking you up every morning, try ignoring her. When she realizes that she’s not getting any attention from you, chances are, she’ll eventually stop being such a reliable (and annoying) alarm clock.

You’re Hurt From Your Dog Pulling on the Leash

Walking with your dog can boost your health, but it can also cause injuries, according to multiple studies. One hospital in the United Kingdom recently reported 37 cases of injuries caused by dogs — and most of the injured were pulled over while walking, while others tripped on walks or were knocked over by their pets. Plus, a 2009 Centers for Disease Control (CDC) report found that emergency rooms see an average of almost 87,000 fall-related injuries per year, and dogs cause nearly 88 percent of them. In addition, many of those fall-related injuries caused by dogs happened when pet owners were walking them. So really, it’s in your best interest to teach your dog to behave on a leash.

To help prevent leash pulling, train your pup to walk on a loose leash. When your dog pulls hard enough to make the leash tight, stop in place and don’t move forward until the leash is loose again. If he’s pulling to smell a bush or greet a dog, allow forward movement only while the leash is loose. Dogs are more likely to pull on back-clip harnesses and flat collars, soconsider trying a front-clip harness or head halter instead.

Your Cat Is Scratching Your Hands

Are your hands covered in scratch and bite marks? You might be partially to blame. Many people use their hands to rile up and play with kittens. This might seem cute at first, but your kitten is going to grow up and have sharp teeth and claws. The behavior is even more troubling in light of a study published in The Journal of Hand Surgery that found that 30 percent of patients with cat bites on their hands were hospitalized. The researchers further noted, "Cat biteinjuries to the hand can progress to serious infection. The treatment of such infections often requires hospitalization, intravenous antibiotic therapy and operative treatment." Ouch!

To begin mending your cat's behavior, stop using your hands toplay with your cat. This may seem odd, but there are ways to engage without getting too close to the claws and teeth. Redirect your cat's behavior by using items such as a feather teaser toy and food puzzles. Play with your cat a few times a day so he can burn off his excess energy. If you suspect your cat’s biting and scratching behavior is not out of play, get help from your veterinarian.