A Backyard Guide to Saving Ladybugs 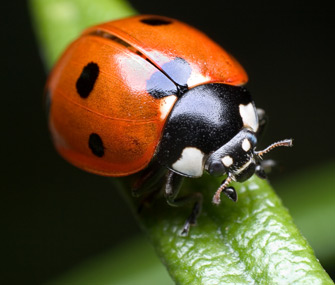 Even if you're no fan of insects, you're probably drawn to cute, colorful ladybugs.

When you think about ladybugs, you probably picture a red beetle with two black spots, but that's only one of many varieties. "There are close to 500 species of ladybugs in North America," says Rebecca Smyth, an entomologist with the Lost Ladybug Project. "Between 70 and 80 [percent] look like what we think of as typical ladybugs."

What you most likely don't know, though, is that most of the ladybugs you see in your yard or garden are foreign invaders. Scientists are trying to find out where our native species are living and thriving — and they need your help. It's as easy as taking photos and uploading them to the Lost Ladybug Project.

Most of us are delighted when a ladybug lands on or near us, but we would probably feel differently about them if we were another insect. These adorable beetles are actually predators, which makes them important to the ecosystem — and to our gardens.

"They perform a very important function in managing the populations of small, soft-bodied, plant-eating pests like aphids," Smyth says.

Aphids are a major food source for ladybugs because they're tender year-round, unlike other insects that metamorphose into crunchier forms. But ladybugs don't live on aphids alone: In the spring, they also eat the larvae of many other insects. And the ladybug's own young are great pest controllers as well — fast enough to run after prey, they look a bit like little alligators.

Native ladybugs may have no trouble handling aphids, but the beloved beetles are losing the battle with relatives introduced from abroad. The most common, the Asian multicolored lady beetle, is large and aggressive — great if you've got pests on your crops, but not so great if you're another ladybug.

"The problem is, these big, aggressive species develop quickly, they eat quickly, and no ladybug species is very fussy about what it eats,"Smythsays. "They eat each other; they eat larvae of other species of ladybugs."

Which Ladybug Is Which?

In 1985,a book about North American ladybugs was published; at that time, the Asian species wasn't common enough for scientists to include them on the maps showing different ladybug types and where they were found. Not quite 30 years later, however, "it's the most common on the whole continent," Smyth says, and along with other introduced species, it's outcompeting the natives.

The one time people tend not to find ladybugs quite so appealing is when they come into a home in large numbers to find a place to spend the winter. And nowadays, the ladybugs flocking to the indoors are usually the Asian variety. That fact might seem to offer a good opportunity to get rid of a bunch of the destructive insects, but unfortunately, doing so is tricky.