A Behind-the-scenes Look at the Chincoteague Pony Swim 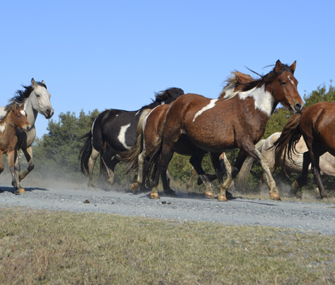 Denise Bowden
The horses running on the island of Assateague.

For the past 89 years, a unique American event has taken place off Virginia's eastern shore. The Chincoteague Pony Swim was made famous by the classic children's book Misty of Chincoteague, written by Marguerite Henry in 1947, and a 1961 movie based on the book. The swim now attracts 35,000 to 40,000 visitors a year to watch as the wild ponies of Assateague Island make the swim to Chincoteague, where some of the foals are auctioned off to support the volunteer fire company.

It's a grand tradition, but one thing about it drives Kendy Allen of the Chincoteague Pony Centre crazy. "Every year, the same television stations come and show the pictures of the pony swim, and then that's it," she says. "No one asks what they're like after the swim, after they grow up. One of the best-kept secrets in the horse world is the Chincoteague pony, because people don't know what they are and what they're capable of."


Ponies, Past to Present

The wild ponies of Assateague are believed to be descended from domesticated horses raised by early settlers on the island in the 16th or 17th century or, more likely, to have come from a Spanish galleon that shipwrecked in the area, possibly in the mid-18th century. In the 1920s, the Chincoteague Volunteer Fire Company started holding a pony auction to raise operating funds. Now the department owns a herd and has a federal permit to graze them on the island. The auction also helps limit the number of ponies on Assateague to around 150 (the maximum permitted).

Denise Bowden, president and spokeswoman of the fire department, says that aside from all the people taking cellphone photos to post to the Internet, the event is pretty much the same as it has always been. "Very little has changed, except that the crowds have gotten bigger and the money has gotten bigger," she says. "This is still the most down-home, family-oriented event that you will ever see anywhere in the whole wide world."

Riders known as "salt water cowboys," who are mostly members of the fire department, round up the herd the weekend before the swim, which takes place the last Wednesday in July before the last Thursday in the month (which falls on July 30 this year). They wait for slack tide — a period with no current, when it's easiest for the ponies to swim — and escort them across the narrowest part of Assateague Channel, which takes no more than five minutes.

Precautionary measures help to ensure that all the ponies make it safely across the channel. Four pilot boats help lead the way and stay "far enough away so the boats don't interfere with the swim but close enough to be next to the horses within 15 seconds if there is an emergency," Bowden says. A veterinarian rides in each boat, along with several salt water cowboys. In 89 years, they haven't lost a pony.

The ponies then rest before being paraded down Main Street to the fairgrounds, where the auction is held the following day.

That's what the tourists and TV viewers see. Once a foal goes to his new home, though, what happens next?

Allen is horse manager of the Chincoteague Pony Centre, which offers pony rides and shows that demonstrate what the ponies can do. The center has ponies who are bred from descendants of Misty and some who are "veterans of the swim," as Allen calls them. She says that the first month after purchase is a big adjustment for the foals, and the center offers seminars to help new owners.