A Dog Trainer Confesses: My Pug Peed in My Future Mother-in-Law’s Home! 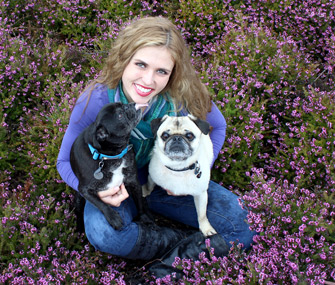 Stephanie Becker
When Mikkel Becker moved into her now-husband's home, she couldn't wait to show off her Pugs' impeccable manners. Willy (left) and Bruce (right) had other plans.

As a professional trainer, every day I help my clients work through their issues with their animals. Often that means helping them deal with behavior that can sometimes be embarrassing, so it’s all the more uncomfortable when it’s my own dogs misbehaving.

Case in point: It was a few weeks before my now-husband, Ben, and I were getting married. We were getting ready to move my Pugs from my house to Ben’s home in Seattle. This was a particularly big deal for Ben, because though he’s an incredible man in every way and is fully committed to the dogs, he is borderline obsessive-compulsive about germs and cleanliness. Ben’s house, which looks like it could grace the cover of a magazine, was in for an upheaval when my 4-year-old daughter, my two Pugs and I would be moving in. He was doing the best he could to be graceful about the upcoming changes, and as such, I wanted to do my best to show off my Pugs’ impeccable manners.


Staying With the In-Laws

One weekend my soon-to-be mother-in-law invited me to visit to spend time with her and the rest of the women in the family while Ben went on a ski trip with his dad. I took the Pugs with me, certain my little fur children would do great. They met the family’s Parson Russell Terrier, Dexter, without an issue, and when the boys left, Ben’s mom and I settled down in the living room to talk more in depth. At first, I kept my Pugs on leash at the house, but once they were settled in, I let them go.

Unfortunately, what had been going well turned into a major moment for my black Pug, Willy. From the moment I first brought him home, he had always been an angel: house trained and mild mannered. But on this visit, his inner demon — jealousy — made itself fully known. All was calm when suddenly Dexter proudly unearthed a stuffed chew bone he had hidden in his dog bed. He proceeded to chomp on his bone, bringing it tauntingly close to my dogs and acting like he might leave it, then snatching it back up. He kept this up, bringing it close, teasing them and then pulling it back, much like he was fly-fishing for Pugs.

Willy, who is particularly fond of long-lasting chews, started to whimper. Then he began letting out exaggerated forlorn moans that sounded of desperation and longing. I tried distracting both dogs with different tricks and treats, but Willy was fixated on Dexter and the bone. Finally, Ben’s mom couldn’t stand to see Willy’s pathetic desperation as he watched Dexter parade around his prized possession. She distracted Dexter, picked up his bone and put it away in a cupboard. We then put all three dogs on their leashes and took them outside to burn off their angst in the yard. 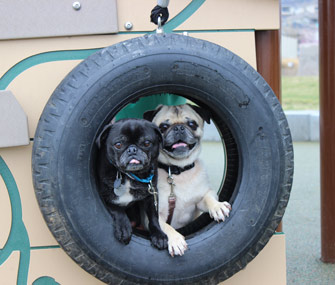 At the doorway, I let the two Pugs off leash, but when I unclipped Willy, he did a move that could only be compared to a fake out in football: He did a 270-degree turn around me and dashed toward Dexter’s bed on the opposite end of the house like he was going in for the touchdown. I assumed he was going back to look for Dexter’s bone, so I was shocked when he came to a sliding stop at the dog bed and lifted his leg. Without a second’s delay, he peed in a large arc directly on top of the embroidered lettering that read “Dexter” on the dog’s personalized bed.

“Willy!” I cried, shocked that my dog, who had never had a house accident, would do something like this. He turned around with a look of satisfaction on his Pug mug. Then, with his mission complete, he ran outside.

I immediately apologized, but Ben’s mom was laughing really hard. “Let’s just not tell Ben about this one!” she said, knowing how it would freak out my overly clean then-fiance. I can only think it was jealousy and frustration that brought Willy to such an appalling display.

That moment has been kept between his mom and me — until now, when Ben will finally read what actually happened that weekend. Ben, I promise, it has never happened again. I can only say that revenge was Willy’s to have that day — and he had the final laugh.