Despite having no intention of adopting, Maguire fell in love with Louis ofLāna‘i. She and her husband didn’t take the cat when they left, but Maguire couldn’t stop thinking about him.

“I wrote to Kathy and asked if he was still available, and he was. I really didn’t have the vacation time available to go back out toLāna‘i, but I didn’t want to ship him in cargo. So I used my points and miles to fly out [an employee] from L.A.R.C.,” Maguire says. “I also got them a Delta lounge pass so Louie could get out and stretch his legs during their layover in Atlanta,” she says.

“Most people come home with a T-shirt or something from their vacation or honeymoon,” Maguire says. “I came home with a cat!” But her involvement didn’t end there. 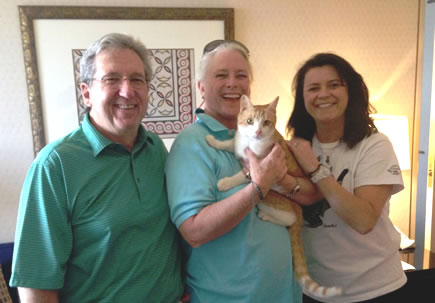 Courtesy of Anne-Marie Maguire
Guapo settles in with his new Canadian family.

Maguire had booked a trip to Maui in May of this year and planned to make a trip over toLāna‘ito visit L.A.R.C. She spoke toCarroll ahead of time and learned that a couple in Montreal had recently fallen in love with a cat named Guapo, but because of their travel plans, they couldn’t take him with them. Once they got home, the logistics of shipping him safely made adoption seem nearly impossible. Happily, Maguire stepped in with a plan.

“I had a first-class ticket booked to come home, but I told Kathy, ‘If they’re interested in adopting him, I can change my first-class ticket on United [which has no under-seat space for a carrier] to a coach ticket on Alaska Airlines, and I’ll bring him home with me,’” Maguire says. She did just that, later driving from Boston to meet the couple and deliver their precious new cargo.


Making a Difference Beyond Lāna‘i

L.A.R.C. doesn’t place as many cats in homes as some large rescues, partly becauseLāna‘ihas a limited number of homesavailable for cats, but also because all of the cats were feral to begin with, and while many acclimate to human contact with ease, others prefer to keep their distance. However, Carroll feels strongly about making a difference in cats’ lives beyond her own “Lāna‘iLions.”

“Now we’re having other rescue groups looking at what we’ve done, and they’re saying, ‘Wow, I could do this!’” Carroll says. She’s also creating a presentation to show what they’ve done, which she hopes will inspire others to take a leap of faith when it comes to helping animals.

“My favorite quote is the Lily Tomlin quote: ‘I said, "Somebody should do something about that." Then I realized I am somebody,’” Carroll says. “Doing something is always better than doing nothing, cat by cat and kitten by kitten.”