Home ›
Our Pet Experts ›
Adopting Hank the Handful: The Challenges of a New Pooch

Adopting Hank the Handful: The Challenges of a New Pooch 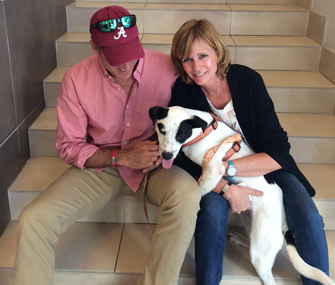 Courtesy of Carolyn Magner Mason
The author holds her new dog, Hank, on his adoption day. Hank was adopted through Operation Paws for Homes.

It took nearly a year to convince my husband to consider adopting another dog after the death of our dearly beloved Old Man Doug. “How does never sound?” was his usual answer to how long before we adopt. He needed time to grieve and I needed a dog while I grieved. One October afternoon, we ended up at an adoption event where we spotted Ranger Boy, sitting there, taking it all in.

His official documents say he’s a terrier/hound mix and was approximately a year old. Ranger Boy, who looks like Pete the Pup from Little Rascals, scooted close to me and then flipped on his back while I scratched his tummy. Later, I realize he knew darn well he should be on his best behavior.

On the way to the pet supply store, we decided to change his name to Hank. The only history we had was that he was rescued from a West Virginia high-kill shelter. Hank seemed liked a good Southern boy name: solid, with a country music twang and a theme song about inheriting bad behavior. Little did we know then how prophetic that would be.

Well, hello, Hank! The trip to the pet store went well. He chose his own bed, and we stocked up on food, bowls and what the clerk said was a top-of-the-line crate.

Things were dandy until his first walk. In his defense, he probably had never been on a leash, in a city, on a sidewalk or even on a walk. He is 35 pounds of pure predator instinct. The minute we opened the door, he launched himself into the world, dragging me down the sidewalk as pedestrians scattered in terror. “Hank!” I yelled as he treed a city squirrel, jerking me halfway up the tree with him.

It took both my husband and me to pull him back home and into his crate. We needed a minute to think. The next thing we knew, he destroyed the crate, peed on the floor, ripped the squeaker out of his new toy and looked at us expectantly. Next?

The adoption contract states you have seven days to return him to his foster home. I didn’t have time to sign up for obedience training. I had a week. And it wasn’t about the refund; it was about making sure Hank had a good adoption chance. I shuddered to think of the new description on the pet website if we did return him: "Through no fault of his own, Hank was returned to foster care."

We needed a professional evaluation. Pronto.

I hauled him to a respected local trainer. “You got a terrier,” he says, reminding me how he advised I stay away from terriers and hounds. (I don’t take advice nearly as well as I give it.) The trainer bent down and talked to Hank and they went for a brief walk. He declared Hank not only trainable but also a good dog. Of course, I would have to do my part in the training process. I signed up for six weeks of (expensive) personal training.

The biggest obstacles to walking on a leash are the dastardly city squirrels. Hank’s prey drive is so strong he would dash across the freeway after a squirrel. He would drag me to my death for a squirrel. 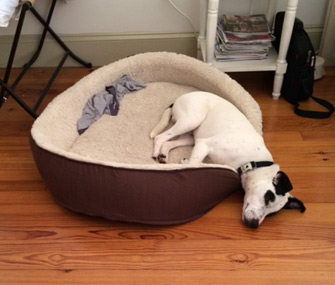 Courtesy of Carolyn Magner Mason
As you can see, Hank hasn't quite gotten the hang of sleeping in dog beds.

This is not my first squirrel dog rodeo. Doug was a country squirrel dog who actually lived in the country, and the squirrels were rightly terrified.

But in the city, dogs trot alongside their owners, sit at the curb and I swear, they watch the lights turn before heeling neatly across the street. The squirrels are not at all afraid. In fact, they have spread the word about the new kid on the block. Now, they come at us in group, chucking nuts from trees, chattering, taunting and just out of reach. “Hey ya Hank, come and get us!”

Miraculously, after six weeks of dedicated positive reinforcement training (and trunkfuls of liver treats), Hank heels nicely on a leash, will sit, stay and lay down upon command.

He is also learning to control his instinct to murder squirrels. That extreme effort is almost painful to watch as he trembles and whimpers at the sight or smell of them.

“Oh, Hank,” I think. You were born to run in fields and hunt for birds and varmints. When you twitch and cry in your dreams, you're dreaming of forests and hunts, not sidewalks and poop bags. On the other hand, you are alive and part of our pack now. It’s probably not what you dreamed about, but it’s going to work out just fine.