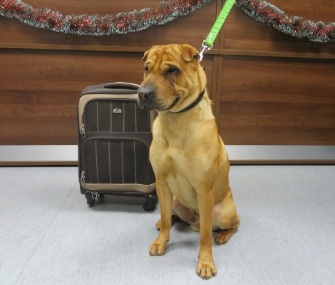 Scottish SPCA
Kai, a Shar Pei mix, was abandoned at a Scottish train station Friday with a suitcase full of his belongings.

There’s promising news for Kai, the Shar Pei we told you about yesterday who was left alone with a suitcase at a train station in Scotland. The Scottish SPCA, which is taking care of the dog, has been flooded with offers to adopt him after his sad photo appeared all over the media. “We have been overwhelmed with lovely messages for Kai and would like to thank everyone,” the group wrote on Facebook. “The phone at our Glasgow centre has … been ringing off the hook with offers of a new home for this adorable boy, who must be the most filmed and photographed dog in Scotland and has taken being in the media spotlight in his stride.” Although some offers even came from the U.S., the SPCA says it will “find him a new home in Scotland :).” They said Kai does need an operation on his eyes, and they’re raising money for his care at JustGiving. — Read it at the Washington Post