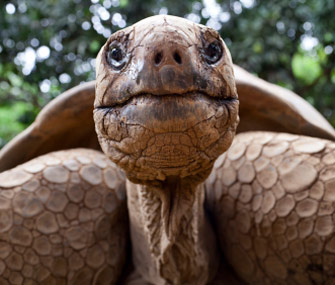 You're probably familiar with the Galapagos tortoise. The largest living tortoise, they can be more than five feet long and can weigh up to 550 pounds. They're also the longest-lived vertebrate: They can live for a hundred years, and the oldest on record survived to 152. But unless you know one personally, you'd probably be surprised by how smart they are — and how opinionated. To learn a little more about the Galapagos tortoise, we talked to Don Middaugh, curator of ectotherms at the Catoctin Wildlife Preserve and Zoo in Thurmont, Maryland. He told us about Galadys, their 24-year-old female, who is quite a character.

Galadys can not only tell people apart, but she likes some people more than others. She prefers women to men, and her favorites are two women volunteers. "She'll come when she's called by them. She will follow them anywhere like a puppy dog," says Middaugh. This may sound charming, but she is also unwilling to share and will try to bite the volunteers if they're paying attention to the other tortoises.

Galadys likes to be hand-fed strawberries, which she much prefers to her regular diet of hay and greens. She likes to be stroked on her head and legs, and will stretch herself up to request this attention from her favorite people. "And then she'll fall asleep, with her head and neck extended, in their laps," he says. "She snores when she sleeps."

Her most amazing ability is a bit of a problem, though: Galadys has learned to open the door of her enclosure. Not only has Middaugh found her roaming twice, now he has to look out for another trick. One time she unlatched the door but didn't open it, leaving a booby trap when he leaned in to reach for something: "I almost fell into her pen because the door was unlocked."

Here are some more general facts about Galadys and her relatives:

The Galapagos Islands where the tortoises live are actually named after them, rather than the other way around. "Galapago" is Spanish for tortoise.

Galapagos tortoises spend most of the day grazing on vegetation and cactus fruits.

On some of the islands, the finches help keep the tortoises free of parasites — they stretch up on their legs to give the birds easier access to eat the annoying pests.

In the 1600s, sailors would capture these tortoises and keep them on board ship as a source of fresh meat. They could go several months without food and water.

Later they were also hunted for oil used in lamps, and settlers cleared much of their habitat for farming. Today their main threat is introduced animals: Their eggs are eaten by dogs, pigs and rats, and they have to compete for food and space with goats, cattle and other livestock.

It was once thought that there was one species with 14 subspecies. Now scientists disagree about whether there are actually separate species. Four types have gone extinct, including one just recently when the last Pinta Island tortoise, Lonesome George, died in June 2012.

The subspecies look different: Some have domed shells and some are more "saddleback" shaped. The saddleback ones also have longer limbs and necks and are found on the drier islands — it's thought that these adaptations help them reach higher for scarce vegetation.