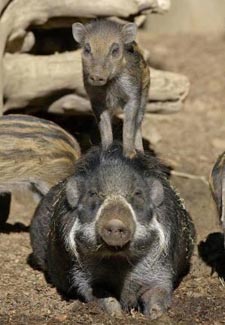 Pigs are pigs, you might think. But our domesticated porkers have a lot of wild relatives. One relatively familiar one is the wart hog, but you probably don't know there's another interesting warty pig out there in the wild. In fact, that's its name: the Visayan warty pig. We talked to Jeff Holland, curator of mammals at the Los Angeles Zoo and chair of the Association of Zoos & Aquariums Wild Pig, Peccary and Hippo Taxon Advisory Group, who provided us with some fascinating facts about this animal.

The Visayan part of the name is this pig's home, referring to the Visayan Islands in the central Philippines. Sadly, it is now extinct on two of the five islands. Unfortunately for the pig, it's just as edible and useful as its domestic relatives, so it is hunted for its hide and meat. It's also losing habitat to deforestation for development and logging.

The other part of its name comes from the three warty bumps on the faces of the boars. These may protect them from each other's tusks in a fight.

The other fashion distinction of the males? During mating season they grow spiky Mohawk-like hairstyles that the ladies seem to find very appealing. Then they shed them when the mating season is over. 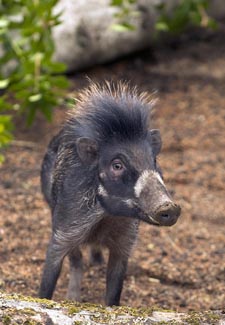 These pigs like to hang out in small groups and eat vegetables, roots and fruits. They turn over the soil very effectively with their snouts, including where human crops are planted — another reason they are hunted, this time by farmers.

Domestic pigs are another threat. They can introduce diseases and parasites but also hybridize with the wild pigs, resulting in crossbreeds with large ears and sometimes even spotted markings.

Like other pigs, they love to wallow in mud. And they must get to do it a lot: Their rain forest habitat gets more than 90 inches of rain per year. Lucky pigs!

The Visayan warty pig wasn't recognized as a species until 1993. The first pigs were brought to the U.S. by the San Diego Zoo in 2003, and there are now 12 AZA-accredited zoos participating in an international captive breeding program to try to increase their numbers.