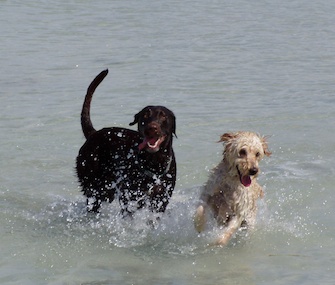 Courtesy of Christi Sherouse
Christi Sherouse's dog, Cleo, right, plays in the water with her best friend, Maya, at the beach along Rickenbacker Causeway on the way to Key Biscayne.

The temperatures in South Florida can get steamy, but with an abundance of dog-friendly beaches, there are plenty of opportunities for your pal to cool off, too, says Estately. Nerd Wallet calls the city’s layout “highly walkable” and says it’s affordable for veterinary care. Plus, it has 13 dog-friendly parks and the Amelia Earhart Bark Park, which features five acres of land with benches and drinking fountains designed just for canines, the blog says.

At Vetstreet, we hesitated a bit on Miami because it has controversial breed-specific legislation, which means that you can’t keep certain dogs (including Pit Bull-type dogs) in the area. Last year, Miami-Dade County voters decided overwhelmingly to keep the ban.

Still, dog owners who spend their days in the tropical sun say it deserves a place on the list.

“There are several state parks and national parks in South Florida that allow dogs, including Bill Baggs State Park on Key Biscayne and Everglades National Park,” says Christi Sherouse, who brings her 10-year-old Double Doodle Miniature Labradoodle, Cleo, to beaches and out shopping at some of the area’s high-end outdoor malls. “Her favorite store at Merrick Park is Nordstrom, as some of the employees keep snacks hidden behind the counters for her.”

Sherouse says she finds that the area is “very receptive to well-behaved dogs.” 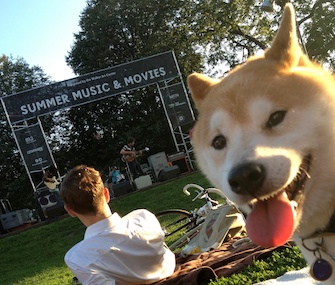 As far as the weather goes, it’s the snow, rather than the sun, in Minneapolis that makes some dogs very happy. Estately says the Minnesota city has a full menu of dog-friendly restaurants, along with a whole lot of parks and plentiful hiking trails to hit with your best friend. Nerd Wallet, meanwhile, says the city is a “mecca for dog owners,” thanks to the parks and hiking, and features lots of events and gatherings to attend with your pooch. One business even has Doga — dog yoga.

Minnesotan Ann Brimacombe spends so much time on the hundreds of miles of city and state trails with her Shiba Inu, Kenji, that the pup is known as the “Mayor of Minnehaha,” the name of a creek there that flows into the Mississippi. At 11 years old, Kenji is “beautiful and fit thanks to his daily strolls along the creek and around the city lakes,” Brimacombe says. Kenji has lots of adventures on his walks, even learning to skijor with his owners during the long winters.

Brimacombe and Kenji enjoy the various dog parks, including what she calls “the crown jewel,” an off-leash park below Fort Snelling along the Mississippi River bottoms. The large park includes a beach, bluffs and several types of forests. “This park is always busy, but because of its size and varied terrain, you can see as many or as few people and dogs as you want,” Brimacombe says. “Plus, if your dog likes water, it's a dream. Just ask Kenji.” 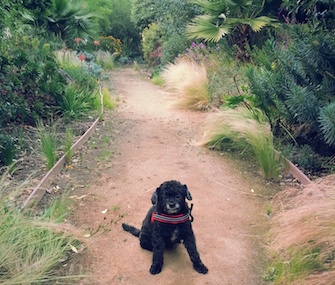 Courtesy of Patty Stanton
Molly poses in the Dogpatch neighborhood of San Francisco.

It’s no surprise to find the City by the Bay — a place with more dogs than kids — on both of these lists. Estately reasons that it has ranked second in the nation for walkability and has the third highest number of dog parks for a U.S. city. When they’re ready for a ride, the blog says, dogs are even allowed on the iconic trolley cars. It’s also home to a variety of dog-friendly eateries and gyms, has 50 Meetup groups to choose from and offers a doggie magazine, Bay Woof. Nerd Wallet notes that as a “city for dog lovers,” many of its 27 parks host breed-specific events.

“Having a dog opens up your world in San Francisco as people like to talk dogtalk about their dogs, what dog parks are like, dog-friendly vacations, dog events and fundraisers on the weekends,” says Patty Stanton, who lives on the outskirts of the city with her rescued 10-year-old Cockapoo, Molly. Stanton volunteers for Muttville Senior Dog Rescue and enjoys spending time at Glen Canyon, a “terrific urban park.” She agrees that there’s an abundance of dogs in San Francisco, and she knows why. “It's dog heaven here!”