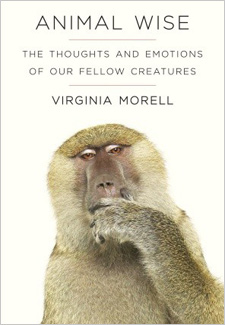 Virginia Morell has spent 30 years writing about animals and nature for magazines like National Geographic and Discover. In her heart, Morell has always instinctively known that her pets had thoughts and feelings. Yet even up to a few years ago, Morell would have been cautious about making that claim in writing because the prevailing scientific opinion was against her. But all that has changed, she argues in her new book, Animal Wise: The Thoughts and Emotions of Our Fellow Creatures.

Through her visits with animal cognition researchers around the world, Morell explored how recent scientific developments confirm the intuition that she — and many of us — always had about the minds of our pets and their animal peers. While scientific confirmation that animals think and feel like we do is a recent development, it's an idea that goes back a long way. Darwin, for example, had no doubt that animals were capable of reasoning and memory, to some degree. But for much of the 20th century, the field of psychology was dominated by a school of thought called behaviorism, which restricted research to behaviors that could be observed. This meant that thoughts and feelings weren't appropriate to study — even in humans.

But as behaviorism started to go out of fashion in the 1950s, Morell explains, it was replaced by a new view of the brain as a kind of computational device for processing information. By the 1980s, it had become scientifically respectable to study how animals take in information from the world around them, learn from it and make decisions about how to act.

Scientists taking this view have discovered that some surprising creatures are capable of impressive acts of information processing. Morell begins the book with a visit to a lab that studies ants, where she talks with scientists who are studying the social structure of anthills. The ants "don't have a leader, and they don't have an overview or blueprint of what they're trying to solve or accomplish," researcher Nigel Franks tells her. "So how are they able to form their complex societies?" Franks goes on to explain that the ants’ rules for choosing a new nest site can be explained as decision-making algorithms like that of a computer program. In fact, he has discovered that the ants' requirements are extremely precise — for example, they prefer an entrance that's 2.5 millimeters wide.

What Animals Are Thinking

But not all animals are driven by math; Morell also explores the ways in which some species mimic our social structures. Male dolphins, for instance, form cooperative groups in the wild, although these social groups aren’t quite as heartwarming as they sound: These dolphin alliances capture females to mate with and fight off competing groups of males. It's not very nice behavior, but the complexity of the interactions shows that they're constantly analyzing their relationships, much like humans. Researcher Richard Connor tells Morell that the dolphins need to figure out who's on their side and who's not: "That's where the real social strategizing comes in," he says. "'What did Harry and Jack do with Tom and Bill yesterday?' 'Can we count on them to go after the other guys tomorrow?' Those are the kinds of issues male dolphins face daily, actually hourly."