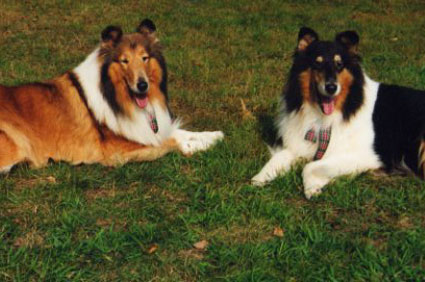 Before Lassie, there was Lad.

This weekend, Collie lovers — possibly including some from as far away as Australia and Japan — will converge on what is now a small park in Wayne, N.J., to pay tribute to author Albert Payson Terhune and the many real-life Collies he immortalized in his more than 30 books about the breed.

The Gathering occurs each August at Sunnybank, the site of Terhune’s former estate and his home until his death in 1942, and generally attracts somewhere around 200 Collies and their owners. This verdant, nine-acre park is where Terhune bred, raised and wrote about his beloved Collies. Perhaps the most famous of his dogs was Lad, whose story, Lad, A Dog, was first told and published to acclaim in 1919.

Terhune’s bucolic descriptions of his rambling estate and the then rural countryside were a perfect backdrop for his tales that sought to highlight the intelligence and loyalty of the Collie breed. While some of his writing reflects the standard opinions of his day, most of his thinking regarding dogs and the natural world around him was impressively modern.

“I think Terhune was so interesting,” says Judy Leathers of the Terhune Sunnybank Memorial association. “He was so controversial for his time — he not only looked at the outside of the dog, he also looked at the inside of the dog as well. He made you feel what that animal was — the soul, the heart and the majesty of that animal.” He was also something of an early animal-welfare advocate, refusing to ship his dogs or leave them alone overnight at a benched show. “The well-being of his dogs always came first for him,” says Leathers.

That legacy is why Sunnybank is revered by Collie lovers and dog lovers in general. Long before the lovely Lassie was on the scene, Terhune‘sbooks had already helped establish the Collie as a noble and loving canine companion.

Sunnybank: "Just As He Described It"

“It’s the ‘Mecca’ of Collie-dom,” says Gerrie Oliver, whose organization, the Collie Health Foundation (CHF), sponsors this weekend’s event. While the Terhune family estate house is gone, Oliver notes that the remaining scenery and monuments are “just as he described it in the books.” 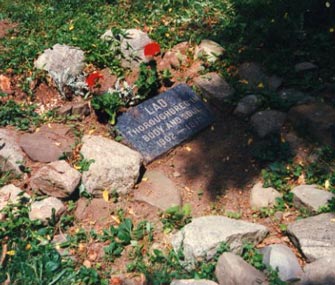 Nancy McDonald, Collie Expressions
Lad, whose grave is pictured above, was the inspiration for Albert Payson Terhune's acclaimed story, Lad, A Dog.

When visitors arrive at the park, “Before you is the ‘fire blue’ lake,” says Oliver, which was the aquatic backdrop for many adventures. The puppy pen, scene of many famous anecdotes in Terhune’s books, has been re-created, and the lily pool, where some of Sunnybank’s treasured literary “Little People” (in the form of frogs and goldfish) loved to linger, has been restored. Throughout the property are stone monuments under which lie the same famous dogs that were the subjects of Terhune’s beloved canine adventure stories: Bruce, Blind Fair Ellen, Wolf, Gray Dawn and, of course, Lad.

In fact, this year’s Gathering has been dedicated to the incomparable Wolf. “He was quite a character, according to Terhune’s stories,” says Oliver. He was credited with many heroic exploits, and when he died his obituary ran in the New York Times.