Some species have the coolest names. 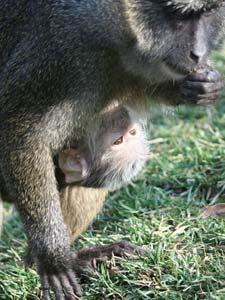 Brie and Bangi, a pair of swamp monkeys (yes, that's really what they're called) at the Fort Wayne Children's Zoo, gave birth a month ago to their fifth baby.

The baby's gender is not yet known, but the parents have already raised three girls and a boy, so the new addition will have plenty of siblings to show him or her the way.

The second-youngest swamp monkey, Luella, had to adjust to the fact that she's no longer the baby of the family. "At first, Luella seemed upset that she couldn’t get all of her mom’s attention,” said zookeeper Erin Fairchild, “but she seems to have adjusted to the new baby.”

Although the zoo's newest member does little more than nap and nurse while clinging to Mama, that won't be the case for long. The zoo is currently closed for the season, but when it reopens on April 20, the little one will be ready to play.

Swamp monkeys (have the best name ever, and) are native to central Africa’s forests, where they feed on fruits, leaves and insects, according to the zoo. As you've probably guessed, swamp monkeys live in swampy areas and are good swimmers, even diving underwater to avoid predators.