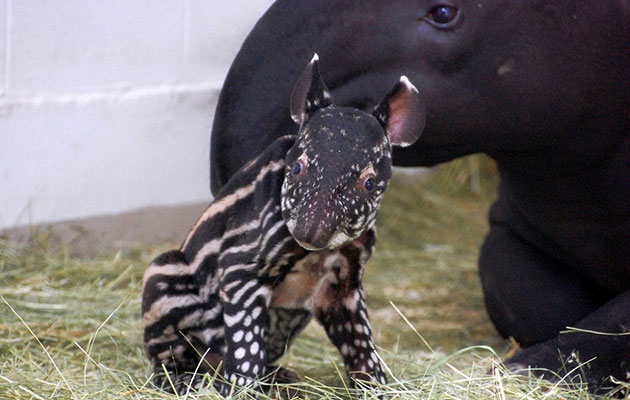 Fast-acting staff members at the Denver Zoo saved the life of an infant Malaysian tapir when he was born on Sept. 3. When they saw mom Rinny having trouble freeing her baby from his amniotic sac, assistant curator Rebecca McCloskey and staff veterinarian Gwen Jankowski safely separated Rinny and the infant, opened the sac and began giving the calf mouth-to-snout rescue breaths.

They also manually stimulated the baby to regulate his breathing and to expel liquid from his lungs.

After a few minutes, the calf began to breathe on his own.

"It's always a little scary when something like this happens, but thankfully we all have great resources and training," says McCloskey. "It was such a relief to see him finally take those first breaths."

The rescue was caught on video, below.

The little guy has been named Dumadi, the Indonesian word for “becoming,” and is walking and swimming with no problems. He’s the first offspring for both Rinny and her mate, Benny.

Malaysian tapirs, whom many people say resemble Oreo cookies as adults, grow up to 3 feet tall and 6-to-8 feet long, and can weigh more than 1,100 pounds. As babies, though, their markings more closely resemble a watermelon, with spots and stripes that help camouflage them from predators.

Now one month old, Dumadi is getting used to his new exhibit and is "doing wonderfully," Jankowski told CBS Denver.