Behind the Scenes During Zoo Feeding Time 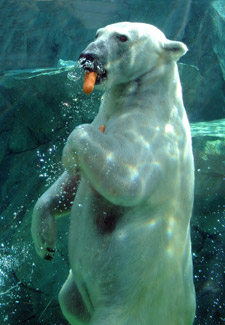 Ever wonder what — and how much — zoo animals eat? Here's a taste of what the 2,500 animals at the Brookfield Zoo in Chicago eat.

"We chop up 400 pounds of carrots and sweet potatoes every week," says Jennifer Watts, Ph.D., director of nutrition at the zoo. "And we make 140 pounds of fruit salad."

Over the course of a year, the zoo buys 85,000 pounds of meat products and about $150,000 worth of whole prey items like mice, rats, crickets and mealworms. And if that's hard to picture, how about this: Watts orders fish once a year, mostly capelin and herring. "When I ordered the capelin this year, I ordered 120,000 pounds," she says, "which was three semi trucks full of fish."

One of only a couple dozen full-time zoo nutritionists in the country, Watts originally planned to be a zoo vet but ended up in a career that's just as important to the animals' health and well-being. "Everyone knows: You are what you eat," she says. "You need good nutrition to have good health."

OK, but why do you need a Ph.D. to do this? Just feed them what they eat in the wild, right?

Actually, it's not quite that simple, says Watts, because most of the plants, animals and bugs these animals eat in the wild can't be purchased. So instead, what a species eats in the wild is analyzed to determine the amounts of different nutrients it contains. Then a comparable diet is designed out of the available products.

The substitutions aren't always as obvious as you might think. For instance, the fruit humans grow is much more sugary and has more moisture and less fiber than wild fruit, so often what's comparable is actually a vegetable. "Our fruit is domesticated and was made for our palate. Think about a Red Delicious apple versus a crabapple," says Watts.

And since the diet of every species hasn't been studied, sometimes you have to extrapolate from what's known. For the zoo's red river hogs, for example, Watts started with the diet of other wild suids like warthogs and peccaries, and then adjusted for the fact that since the species lives in a more lush environment, they probably have a richer diet with more fruit and less fiber. "You have to take into consideration that they live in a different ecological niche," she says. "They're not the same as a warthog, which eats poor-quality grasses." 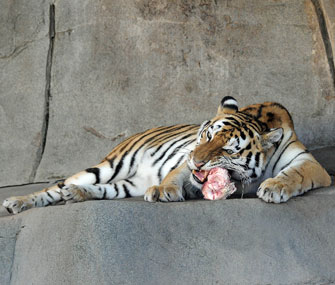 Food is also used for training and enrichment, so Watts comes up with a calorie allotment, and then allows 10 percent of that to go to treats. "We have charts — 100 calories of applesauce weighs this amount versus 100 calories of peanuts is this amount," she says. "It gives keepers the flexibility to use what they have and to change it up."

There are also occasional circumstances where perfect nutrition has to take a back seat. For example, in training some of the bears to come inside quickly in an emergency, the best thing to use turned out to be ice cream sandwiches.

"That's one of those things that as a nutritionist, I had to compromise," she says. "I say to myself, I don't want them eating ice cream sandwiches, but management-wise, this is what the keepers need to work their animals."