Beyoncé the Wonder Puppy: Why Some Vets Think She’s Really a Tiny Tragedy 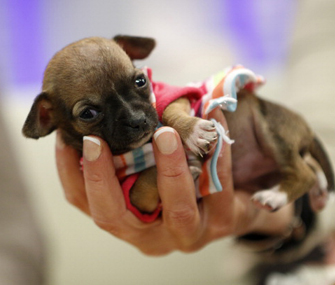 NBCU Photo Bank via Getty Images
Beyoncé, the tiny wonder puppy who's been making the news.

Let’s get one thing straight before I launch into my spiel on the subject of teeny-tiny pocket dogs like Beyoncé and the people who breed or buy them: I don’t particularly think them a good idea — not the breeders, buyers, onlookers or any rewarded parties in this case.

My personal approach to companion animal petdom tends to favor a popular phrase: “Adopt. Don’t shop!” I think that’s as it should be for the vast majority of pet owners. After all, as long as there are more pets than willing homes, is it not the ideal approach?

I tend to think along those lines, but that doesn’t mean that the masses won’t demand more purebred, hybrid or itty-bitty pocketbook puppies to the detriment of all those average-sized needy adult mutts out there. (Just so you know, that’s who tends to get killed at shelters.)

I like to be clear in stating that what I have to say below is my own personal opinion and should not be misconstrued as representing the opinion of Vetstreet or its contributors. I’m a veterinarian, and that informs my worldview enormously. Still, I’m nowhere near alone in my opinion, yet feel free to take these words with the requisite salting you deem appropriate.

In case you’re not aware, Beyoncé is an American singer in the R&B tradition. She’s quite good. But this post isn’t about her — it has to do with her namesake, a teensy-tiny, 2-week-old, 4-ounce puppy.

Reportedly a Dachshund–Chihuahua cross — her provenance is essentially unknown, which is how it goes with most rescue dogs — this Beyoncé made the news when it was reported that her rescue group was applying for Guinness Book of World Records status on her behalf for the exalted title of smallest pup on the planet.

That's perfectly OK, I guess — if you’re into holding records and making statements.

But what kind of a statement does a pup perched atop an iPhone make? I also have to question the wisdom of carting a delicate pediatric pup around to various and sundry photo ops and talk shows?